Basically, the whole movie is him doing variations on this routine again and again, all of it nicely photographed in Spain by Christopher Doyle. He goes to different places and meets different people. At every cafe he orders two espressos in separate cups. Every contact says the same thing to him at first, then talks to him about some interest of theirs (movies, music, molecules). He doesn’t respond and usually doesn’t look like he’s listening. Then they give him the same kind of matchbox with the same kind of note in it which he always eats. In between he checks out some art such as paintings, music or dance. 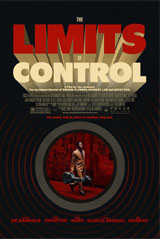 The people he encounters are sometimes played by familiar actors like John Hurt or Gael García Bernal, always in funny getups with weird quirks. But you just get a little goofy conversation, they don’t really have a chance to get much of a character going. The most memorable is Tilda Swinton, because she wears a white wig, cowboy hat and goofy sunglasses and talks about movies in a way that describes the movie you’re watching (“Sometimes I like it in old films when people just sit and don’t say anything.”)

Actually I take it back, the most memorable is probaly an actress I was not familiar with, Paz de la Huerta, because she’s always trying to seduce him and never wears more than a transparent raincoat and glasses. Usually less. When he lays in bed staring at the ceiling she lays on top of him naked.

There are lots of shots of him driving around, but without music as catchy as in the scenes where GHOST DOG was driving around. Also you keep seeing him walking. He has some nice silk suits and a cool strut. Sometimes he carries a guitar case (he never plays the guitar) or a bag (with nothing in it). He does tai chi a bunch of times. The climax of the movie is when he does tai chi and then all the sudden he cracks his neck. And you think holy shit, he never cracked his neck before. I think we’re at the part where he’s gonna kick ass. (He kind of does. Not really.)

I always remember that when I saw GHOST DOG the first time,the credits came up and a guy in the back yelled that he wanted his money back. That guy wouldn’t have even made it an hour into LIMITS OF CONTROL without being reduced to tears. It makes GHOST DOG look like IRON MAN or RAIDERS OF THE LOST ARK or something. It’s very slow, very quiet, very repetitive, very little happens. None of the characters have names and the main character barely talks or changes expressions. Many scenes have no music, the ones that do are mostly hypnotic feedback drones.

I kind of liked it. But I was kind of disappointed. I’m not sure I really get it. The promotional materials say, “His journey, paradoxically both intently focused and dreamlike, takes him not only across Spain but also through his own consciousness.” Which I guess maybe means the things people talk to him about are the things going on in his consciousness? To tell you the truth I got no idea what that means. Or what the title means. Sorry.

My mistake was going in thinking of GHOST DOG. That movie is also quiet, meandering and meditative. It also explores lots of different goofy ideas in Jarmusch’s head and includes cryptic motifs that you can try to decode. But it has more of a build to it. All the different themes start to pile up on each other, and there is more of a plot. The mob comes after Ghost Dog, his retainer tries to tip him off, he tries to kill the guys he has to, there is a little bit of action. Not enough serious samurai/hitman movie to satisfy that one guy in the back of the theater, but it’s definitely there. Not in this one.

Jarmusch named the production company for this one PointBlank productions, and said the movie was inspired partly by POINT BLANK and by the Richard Stark books. But it’s the dreamy arthouse side of POINT BLANK and not the pulp fiction structure beneath. In some ways it could even be compared to MADE IN USA, Godard’s version of Stark’s The Jugger which I found annoying, self indulgent and dismissive of the book it was based on.

Without a strong narrative THE LIMITS OF CONTROL feels nothing like Richard Stark, but I can see what Jarmusch was referring to. “Lone Man” captures the side of Parker that has never been in any of the official movie adaptations: he is one hundred percent focused on the job and on self-preservation, he doesn’t care about anything else. He turns down sex and says he never has it while working, which comes directly from Parker. Parker doesn’t even like to make small talk with people except as a cynical psychological trick to get them to do what he wants and make a job go smoothly. I’m not sure Lone Man would even do that.

De Bankolé  is perfect for the role. His distinct jawbone and eyes are always interesting to look at, he looks good in the suits, he seems convincingly badass without ever doing anything or even carrying a gun. Until the end of the movie the only thing he kills is a cell phone. The scene where he cracks his neck and then starts air-punching is legitimately exciting, but I was kind of hoping that meant it would burst into a little bit of action like in an arty crime movie like GHOST DOG, THE LIMEY or some of the Takeshi Kitano movies. But that’s not what Jarmusch is going for this time around, I guess. “Lone Man” has been scoping out this heavily guarded fortress and you keep thinking “how the fuck is he gonna get in there?” but sorry, you don’t see how. (UNSPOILER – spoiling that something does not happen.) You don’t even see him running toward it and then cut away. You just see him looking at it and next thing you know he’s inside and at first I didn’t even realize he was inside, he was sitting in a room all the sudden so I thought he must’ve gave up and went back to the hotel.

If you saw this guy sitting outside the cafe drinking his two espressos, you would want to watch him. And if you were really ballsy or invisible maybe you would follow him around. And you would learn about as much as you do from the movie. With the movie you get to follow him into the fortress, the hotel room (where he does tai chi or stares) and the bathroom stall (where he does more tai chi and changes his suit). But mostly you just see him doing the same things over and sometimes encountering the same phrases or images.

There’s alot of talk about subjectivity in the movie, and at the end he stands looking at a painting covered in white cloth. So I guess the idea is that who the fuck knows what’s going on here, it’s up to the viewer. But if that’s all it’s suppoed about that’s kind of a bummer I think.

Maybe I need somebody to lead me by the hand a little more than I’d like to think I do, but I would’ve liked this alot better if it was all leading to something. Oh well.

I do think a few of you will love it, but most people would just shrug and then leave.

arthouse badass Isaach De Bankolé Jim Jarmusch Parker
This entry was posted on Monday, May 11th, 2009 at 1:29 am and is filed under Crime, Reviews. You can follow any responses to this entry through the RSS 2.0 feed. You can skip to the end and leave a response. Pinging is currently not allowed.

18 Responses to “The Limits of Control”