Reeker and No Man’s Land: Rise of Reeker 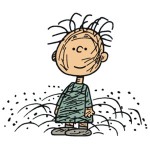 I’d been meaning to see REEKER since it was mentioned in the Fangoria magazine, then I was reminded by some list of recommended slasher movies. I seem to have pretty much squeezed the juice out of this genre but every year around Halloween I start scouring again just in case there’s a couple drops I missed. And there probaly are still some good ones out there that I haven’t seen.

I’m not sure this one counts, though. It’s okay. It’s about a group of older-looking college students carpooling to AREA 52 – THE WORLD’S BIGGEST RAVE! Two women, three men, and one of the men just stole a box full of ecstasy pills from a psychotic corpse-fucker. And that guy is sort of mad about it.

But the real threat isn’t the psycho, it’s some invisible guy in a gas mask with a weird drill weapon and a blowtorch. Sometimes you see flashes of him, but usually he appears as heat trails. He’s like Predator except less stealthy, because he smells so terrible. Nobody ever comments on it, thankfully, but his victims always gag and puke from his presence.

This brings up some interesting questions. Is this really the first stinky killer? I’m guessing he’s not. There’s no way Jason smells fresh. As a kid I doubt he had the best hygiene. Living in the woods – definitely not. Then he started rotting. By JASON v. FREDDY he’s been to Hell, probaly got a sulfur odor. Add freezer burn into the mix for JASON X and I’m surprised we haven’t seen this gagging before. Also consider Leatherface – it is documented that Gunnar Hansen smelled terrible from wearing the same unwashed clothes for the whole shoot. But I bet Leatherface had been wearing it for years! Plus the mask.

There’s one pretty likable character, a blind guy with a Paul Rudd-ish charm, played by Devon Gummersall. I didn’t trust him because I heard on FELICITY he played a friendly Tarkovsky nerd who turned out to be a date rapist. Fortunately here he never violates anybody.

The movie’s only okay, but it has some pretty good action sequences with Stinky attacking vehicles. I like the idea of PREDATOR as a slasher movie instead of a war movie. Of course it’s not nearly as good, and the cast is not as impressive, although I was happy to see Michael Ironside as a tourist looking for his missing wife. He could’ve been in PREDATOR. But they would’ve given him more to do there.

I think the smartest decision of the movie is that – unless I wasn’t paying enough attention (which is possible) – they went the admirable route of not explaining who he is. An alien? A demon? An interdimensional zombie? An eccentric inventor who smells like ass and likes to murder people? It was smart to leave that up to interpretation.

Except whoops, because now they made NO MAN’S LAND: RISE OF REEKER. In this one we find out that the Stinker was a serial killer called “The Death Valley Drifter” who heard voices telling him to kill, and he was destined to– I don’t know, I watched it last night, I forget exactly what it was, but the point is now we know. He’s not a demon or nothin. He’s a bald dude that smelled bad because of the dead bodies in his shack.

The opening of the movie (a prequel encounter with a slower-than-usual version of vehicular homicide) is cool, and the end is pretty cool. In between is pretty damn boring. The characters this time are some dudes who robbed a casino, the Jessica Simpson-esque waitress ex-girlfriend of one of the robbers, and the cops who are trying to catch them. They must’ve gotten bored with the cat and mouse stuff so there’s less action this time and more supernatural weirdness. The victims slowly realize that they’re trapped in some kind of ghost world or something, and they can survive some pretty bad mutilations. In a rare moment of mild interest a pair of legs walks around without a torso attached.

This time since this Reeker fellow isn’t a mystery they show him alot more and he has sort of a herky-jerky skipped frames effect that I guess means he’s skipping around between realities or something, I don’t know.

In the end they try to have a big reveal and it seemed sort of clever although to be honest I was so bored in the middle of the movie that I kind of lost track of what happened to who, so when there turned out to be something more to their deaths than you originally realized I wasn’t able to piece it all together. But there was one weird little touch that I really loved, and I don’t really recommend the movie so I’ll just tell you about it. The climax involves a car blowing up, and after it happens you see a bird flying away on fire. It’s kind of a phony digital effect but it’s kind of in the background, there’s not a closeup, so it seems like a nice surreal detail. Then the bird circles around a couple times and flops down on top of a leaking propane tank, causing another explosion. I gotta give a huge thumbs up to the burning bird explosion, I wish the movie had more of that spirit.

The sequel has better production values but otherwise pales in comparison to the original. It reeks of desperation. It stinks. I smell a rat. Something smells fishy. I love the smell of napalm in the morning. etc.

By the way, I assumed this was done by another one of these young up and comer horror fan directors but director Dave Payne previously did a bunch of movies including ALIEN TERMINATOR (one half ALIEN, one half TERMINATOR), ADDAMS FAMILY REUNION, and JUST CAN’T GET ENOUGH (the story of Chippendales).

DTV
This entry was posted on Monday, October 13th, 2008 at 11:33 am and is filed under Horror, Reviews. You can follow any responses to this entry through the RSS 2.0 feed. You can leave a response, or trackback from your own site.