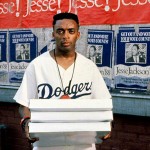 According to the Rotten Tomatoes, Spike Lee’s new World War II epic has a 27% organic and plump rating (or whatever). In other words it has a lower approval rating than George Bush. Also, by the way, lower than CHRONICLES OF RIDDICK or DAREDEVIL.

I don’t think that’s fair. This movie is WAY better than George Bush. The other thing that’s been unfair is how all the pre-release coverage was about Lee’s alleged feud with Clint Eastwood. The movie is about the Buffalo Soldiers (or “experimental colored brigade” as a white commanding officer calls them in the movie) so some reporter got Lee to say something about there not being enough brothers on the wall in FLAGS OF OUR FATHERS. Then somebody told Clint that Spike said some shit and got Clint to say some shit back and then the two quotes were taken out of context and repeated, so in the IMDb headlines and in the imaginations of movie fans around the world it turned into a battle between Spike and Clint instead of a movie that can stand on its own.

In my opinion Spike is a very talented and unique filmatist who makes a legitimate (but debatable) point about Clint, and Clint is also a very talented filmatist who doesn’t need anybody standing up for him or feeling sorry for him because, not sure if you noticed this but HE’S CLINT FUCKING EASTWOOD. He can handle it on his own. And besides, nobody cared when Larry Clark actually did intentionally attack Clint with an unfair portrayal as a racist gun nut in WASSUP ROCKERS. I guess outspoken black man vs. Clint is more sensational than weird pervert vs. Clint.

Anyway, if we gotta reduce it to that battle I’ll say this: MIRACLE AT ST. ANNA is better than FLAGS OF OUR FATHERS, but not as good as LETTERS FROM IWO JIMA. So Spike and Clint both win. Let’s all be friends now. (You too, Larry Clark. Looking forward to your weirdly perverted WWII epic.)

The story starts with a weird mystery: it’s 1983, a guy is trying to buy stamps at the post office in New York City, the old man behind the counter pulls out a Luger and shoots the guy. Searching his house, the cops find a bag in his closet containing the head of an Italian statue that turns out to be worth millions of dollars. But the old man won’t talk, so what the fuck is going on here? ‘Cause he didn’t find this thing at the Goodwill.

We then flash back to WWII where the old man, who is actually not an old man at that age and is named Hector, is in one of the African-American regiments in fascist Italy. His group advances farther than their racist white captain believes possible, so he decides they’re lying and bombs the sector they’re in. Then they get separated even further when one of them saves a little orphan boy who’s hiding out in an abandoned house. So they get stranded in a small village. Then it almost turns into a SONATINE kind of thing where they wait it out, although they also have a mission of catching a German for questioning.

I like most of Spike Lee’s movies, and the ones I don’t like I still think have interesting things about them. But to me his biggest problem is his lack of focus. He always tries to do too many things at once. The best example I got is HE GOT GAME – it’s an underrated one but I think it would be way better if they cut out the entire subplot about Milla Jovovich’s hooker character, I don’t know why that was in there. You know what they say: kill your babies. Just take your babies, even if they are Milla Jovovich, and just suffocate those babies with a pillow or something, until the babies die. You know come to think of it I’m not sure I like that metaphor, that’s kind of a fucked up metaphor. Anyway, cut out some scenes sometimes, is what it means.

ST. ANNA is kind of a different one for Lee because this story (adapted by this guy James McBride from his own novel) actually is an epic, so it needs to have all that ambition that sometimes overstuffs his other movies. It tackles a bunch of different things, but pretty much all of them tie together by the end. It’s a WWII story with 1983 police mystery wraparound, it also flashes back to the soldiers during training to show how their treatment by white Americans is different than by white Italians. It’s about American soldiers on a mission, their conflict with their racist superiors, their relationships with the Italian villagers, their partnership with the partisan rebels. It’s about one soldier latching onto the kid like a pet, and the statue head like a lucky charm. It even has a bit of the old magical realism in there. I guess I’m in that elite 27%, I thought this was a real interesting story.

But it starts off a little iffy. The opening is old Hector watching John Wayne in THE LONGEST DAY on TV and complaining “We fought that war too.” That seems a little on-the-nose for Lee at this age, I think we get it just by watching this story, we don’t need to have it pointed out in the opening scene. Then when we join the Buffalo Soldiers in battle the emphasis at first is more on buffoonery than heroism, the soldiers all arguing with each other and at first the dim-witted gentle giant character Train has various stupid misunderstandings played for cheap laughs, like a cartoonish Lenny from OF MICE AND MEN. And maybe I’m dumb or maybe the storytelling isn’t quite as clear as it could be – it took me a while to remember the names of the four leads and I had a few questions afterwards about basic story elements I was supposed to pick up on but didn’t.

So a few things were maybe too subtle for me, but on the other hand I gotta say that there are a couple of what I would consider Paul Haggis moments. There’s a flashback sequence where the soldiers remember being discriminated against in a diner. After the racist incident there’s a shot of the diner owner’s son watching the whole thing. There has already been a pretty heavy handed discussion about how hatred is passed on from parent to child and allegedly can’t be removed after it sets in. So the shot of the kid is meaningful… and then the dad says something like, “This is a good lesson for you, son. You have to treat them like animals.”

Come on Spike, we already GOT it. But now that you underline, highlight it and add three exclamation points you insulted us.

(It’s also kind of goofy that some of the members of the platoon have died in combat, but it is the exact lineup of surviving soldiers who were there for this incident. Nobody missing, nobody extra. Oh well.)

And I didn’t really mind this, but it should be noted that there are some heartfelt conversations that come out of the blue. Spike Lee characters are open about their feelings so they will sit down to confront their friends about their prejudices or hypocritical values. Combined with Terence Blanchard’s scoring that can come off pretty corny sometimes.

But shit, I liked this movie. It combines several different types of stories, several different cultures, so it doesn’t feel like any other WWII movie I’ve seen. The racism toward the soldiers is not the main topic, but it’s interesting to see how they deal with their feelings risking their lives for a country that treats them as subhuman, even giving German POWs more rights than them. They have to confront Nazi propaganda that tries to exploit those feelings, communicate with people speaking different languages, fighting with different motives. And there are mysteries within mysteries – who is this “sleeping man”? Where did this little boy come from? Who the fuck is Arturo? Who is the traitor? And it’s kind of nice to see the pieces of the puzzle mostly fall into place and reveal themselves. Spike Lee is willing and able to do a 3 hour movie that ends inconclusively, but going from the novel he was able to bring things together in a satisfying climax.

I don’t give a fuck if he has a big mouth, or if white people can’t get over the racial politics of the past, that doesn’t change how good his movies are. There’s this myth that Spike Lee’s movies are always about race and that he hates white people. First of all, if you look over his filmography you’ll see that a good 3/4 or more of his movies aren’t primarily about race. But secondly, why the fuck would it matter? Shouldn’t he make movies about the issues that are important to him, that affect his life, that he has something to say about? Isn’t that what art is? It’s such a dumb argument that it’s hard not to see a little denial or even outright racism behind it.

In this case we have a movie where race is an important component of what the story is about. But half of the characters are white and the story at the heart of the movie is about a good-hearted black soldier saving the life of a little white boy. In fact he denies an argument that the kid isn’t worth saving because he’s grown up around hate and will never learn better. Why would a guy who supposedly hates whites so much and thinks they’re inherently racist waste his time telling this story? Making that argument is so clearly out of line and divorced from reality that I can’t help but assume there are some kind of weird racial issues going on in the minds of the people who can’t get over this shit.

And besides, if Spike Lee hates white people then what’s he gonna do, deny you a job? Make your ancestors slaves? In my experience anti-white racism is such a minor problem in this country that I have to be suspicious of people who are sensitive to it. If you live in an all black or hispanic neighborhood and get beat up every day then I’ll consider your concerns, but your average white American who lives among primarily whites but still gets worked up about alleged secret subliminal anti–white statements in seemingly harmless Spike Lee movies – let’s just say I can’t sympathize with you, bud.

Anyway, forget all that shit. Spike Lee is a great, if sometimes sloppy, director, and nobody else would’ve or could’ve made this movie. As long as he keeps making them I’ll keep watching.

Spike Lee
This entry was posted on Wednesday, October 1st, 2008 at 1:29 pm and is filed under Reviews, War. You can follow any responses to this entry through the RSS 2.0 feed. You can leave a response, or trackback from your own site.

One Response to “Miracle at St. Anna”