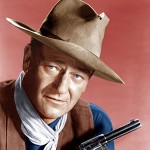 You got me, David. I knew he was right so I pledged to “at least review RIO BRAVO or something,” and he gave me a variety of other suggestions that could come in handy if I am to strive for this particular type of excellence.

You guys probaly all saw it already but just in case: RIO BRAVO is Howard Hawks’s 1959, 2 hour and 40 minute “last great western.” The opening 5 minutes or so is done with no dialogue, but with musical cues any time somebody gets punched or shot, so it kind of seems like a musical pantomime or something. It’s goofy but it’s a great opening because it establishes the basics about the three main characters. First you got Dean Martin as Dude, a pathetic unshaven drunk trying to get a drink at the saloon. Then you have Claude Akins as Joe Burdette, the asshole who throws a coin into the spittoon so that poor Dude will have to reach into a pound of spit if he wants his drink. And then John Wayne as Sheriff John T. Chance, who kicks over the spittoon before Dude reaches in, to save him some dignity.

The first shot of John Wayne is looking up at him from the ground, so even though this is a traditional western and not as gritty as the revisionist ones I prefer, you are definitely gonna get some badass in here. The spittoon incident turns into a fight. Chance gets in Burdette’s face, Dude hits Chance over the head with a board, Burdette is gonna shoot Dude, but some dude tries to calm him down so he shoots that guy instead. Then he goes to another bar.

The scene ends with Chance, back on his feet with blood dripping down his head, coming in to arrest Burdette for the murder in the other bar. And Dude comes in behind him to back him up. As the story unfolds we learn that Dude was Chance’s trusty deputy until he left town with a girl who came in on a stagecoach. When that relationship went sour he started drinking and he’s been washed up ever since. But he’s gonna help Chance bring Joe Burdette in and try to straighten up his life. Starting now.

And the movie is about them being outnumbered, under siege, trying to keep this prisoner. It’s just Chance, his drunk deputy and “an old cripple” named Stumpy, who kind of bothers me becausee talks exactly like an old gal who used to ride the same bus as me and would never shut up. Other people offer help but Chance usually turns them down for their own safety, and Burdette’s rich brother still pays off thugs to shoot them. He does eventually get help from babyfaced Ricky Nelson as Colorado Ryan.

I always heard about this being the inspiration for ASSAULT ON PRECINCT 13, and it does have sort of the same setup, but it’s not really the same kind of movie. For one thing it’s not as confined. Chance does get to walk around to the saloons and to the hotel. There are always people standing around watching him. The threat is obviously there, but it’s more of a “we’re watching you” and not a “if you poke your head out we will play Whack-a-mole.” There is definitely tension but it’s not grabbing your intestine and squeezing it. Even in the climactic guns and dynamite battle our heroes are pretty light hearted, joking around with each other.

What the movie is more about is these characters and their relationships, the camaraderie. The way Chance’s friendship brings out the best in Dude, the way Dude redeems himself to help his friend, the way ol’ Stumpy shows up and helps even though Chance forbids him to. There’s also a love story with Angie Dickinson as a character called Feathers, who becomes smitten with Chance when he does a nice thing for her (basically getting her taken off the western equivalent of the no–fly list). So you get to see this big ol’ middle aged lug with the stupid old hat hit the jackpot.

To be honest though I gotta say, as attractive as Feathers is, there’s no fuckin way this relationship turns out good for Chance. That woman is crazy. During the movie he knows her for a couple days and she already has about fifteen to twenty dramas. She wants him to show her affection and he does, but not in the specific ways she wants him to, and she will not tell him that this is the problem, so instead she throws a fit about something else. It’s supposed to be cute but come on Sheriff, just you wait until the novelty wears off. When you’ve been together for a long time and she’s not quite as young and fit, tell me how cute that’s gonna be then. This kind of drama queen behavior is trouble later on in a relationship, and here you are starting out on that page. Sorry, John. You’re fucked. Get out while you can. It’s not worth it. You’re a good guy, people like you (except the Burdettes), you got a respectable job, there’s lots of stagecoaches coming through. You can do better.

Anyway, this is a real good movie even for those of us not as versed in the westerns. All the characters are great but the MVP is undoubtedly Dean Martin as Dude. Martin didn’t get a chance, or didn’t bother, to do very many serious roles like this. But he does a great job, I was very surprised.

Howard Hawks John Wayne siege movies
This entry was posted on Saturday, February 2nd, 2008 at 11:42 am and is filed under Drama, Reviews, Romance, Western. You can follow any responses to this entry through the RSS 2.0 feed. You can leave a response, or trackback from your own site.