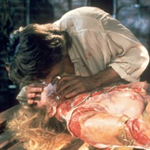 The title is inaccurate, because actually there are two re-animators. Jeffrey Combs and Bruce Abbott return as Herbert West and Dan Cain, Miskatonic University medical students, roommates and bros who made kind of a mess in the morgue in part 1. We pick up 8 months later in Peru, where the two are working as combat medics in a bloody civil war and couldn’t resist unethically experimenting on some of the freshly dead bodies. There’s an effectively disturbing part in the opening where they’re in the middle of a war zone and Dr. West revives a freshly-dead soldier using his glow in the dark re-agent… and the guy growls at him. A local coming into the tent to warn them to get away happens to see West shooting his patient in the head. You want to be careful about stuff like that if you’re a re-animator. 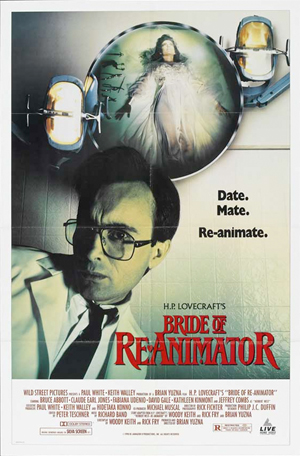 Back in New England the boys somehow get legitimate jobs at a real hospital, even though a cop (Claude Earl Jones) is still sniffing around looking for answers about “the massacre,” as the events of part 1 are now called. He also knows that many body parts have been going missing from the morgue lately. That’s because Dr. West has been skimming. He brings home legs and fingers and eyeballs and shit to mess with in his new basement laboratory.

Their new place is located next to the cemetery (spelled “cemetary” on the sign) and he makes a hole in the brick wall where he can reach in and somehow get to all the graves or something to get more body parts.

Since part 1 he has proven that people’s consciousness is in all of their matter, so therefore he can inject his glowy stuff into a finger and it can be alive and crawl around. This was not really in keeping with what science knew in 1989, but just go with it. West delights in connecting different body parts and bringing them to life, so for example an eyeball with fingers for legs gets loose in the house like a tarantula.

There’s a whole subplot about how Dr. Hill (David Gale)’s severed head is still at the morgue, and a guy that works there, Dr. Graves (Mel Stewart) figures out that it’s alive and how to use the re-agent and stuff. Unfortunately somebody apparently told Stewart that these movies were funny, so he’s playing some of it for laughs, and not getting them.

There’s not really an explanation what happened after the ending of RE-ANIMATOR when Dan unwisely chose to inject his dead girlfriend Megan (Barbara Crampton). I guess it didn’t go well, because West has her heart in a bag. He gives it to Dan as a gift. In the last act he has built a hideous lady body from various dead parts and he gives it Megan (now always referred to as “Meg” for some reason)’s heart.

There’s some fun stuff here, but Yuzna just doesn’t have the careful touch that Gordon does. He doesn’t get that perfect serious-but-sometimes-darkly-humorous tone, the new female lead is not compelling, and Dan’s switching back and forth between reluctant accomplice and completely nuts is not very convincing. The effects are maybe too ambitious, they use alot of fake-looking composites, much more artificial than the blood-spraying puppets that dominated part 1. It’s an inspired idea that Dr. Hill gets bat wings attached to his head and can fly around, but they sure don’t manage to execute it in a way where we believe it. You will not believe a bat-winged talking severed head can fly.

The Bride character has poofy hair and reminds me of Karen Black for some reason. They did a good job of making her disgusting. It’s not just stitches like Frankenstein’s monster, there are sections of exposed muscle and veins between all the different parts, and metal parts bolting alot of it together. She recognizes Dan as her creator and then tries to hump him. Kinda funny I guess, but not as funny as it sounds.

I do kinda like how West starts yelling self-righteously about “I will not be shackled by the failures of your God!” and shit like that. Still not a great roommate, in my opinion. He actually reminds me of a roommate I had when I was young, I didn’t really talk to him much and he had stacks and stacks of phone books that he kept in the hallway. I never knew why until one night I heard him in his room making prank phone calls to other parts of the country. From what I heard they weren’t even jokes, they were just lies, like he was doing a terrible Texas accent and pretending to be a trucker stranded somewhere trying to get someone to come fix his truck, and angry that they’re saying they can’t find him. It was a weird way for this guy to spend his nights. I never talked to him about it.

Anyway, at the end a bunch of creatures made out of feet and hands and stuff crawl out and try to grab West. I guess he’s been making these little abominations and stuffing them back into the hole in the wall. And now the chickens have come home to roost. But not to fatally roost, he survives for part 3.

This was Yuzna’s second movie as director. The first one was SOCIETY, which was written by the same guys, Rick Fry and Woody Keith. Those two later did a movie called DEMENTIA starring Matt Schulze.

Brian Yuzna Bruce Abbott Claude Earl Jones David Gale H.P. Lovecraft Jeffrey Combs Mel Stewart
This entry was posted on Tuesday, November 12th, 2013 at 2:22 am and is filed under Horror, Reviews. You can follow any responses to this entry through the RSS 2.0 feed. You can skip to the end and leave a response. Pinging is currently not allowed.

16 Responses to “Bride of Re-Animator”