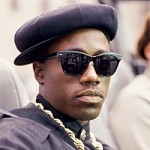 Enormous talent
Piddled away on this shit
Why, Wesley Snipes, why?

Wesley Snipes IS Unstoppable. And by that I don’t mean that he stars in some crappy straight to video action movie called UNSTOPPABLE, although that is also true. What I mean is, no amount of cinematic crappiness can completely extinguish Wesley Snipes’s fire. The guy is great in everything he does, from Spike Lee dramas to vampire movies. He’s great in all 3 BLADE movies, even though the third one isn’t as good. He’s great in that movie where he played a drag queen named Noxzema Jackson. He’s great in his cameo as a crackhead in ZIG ZAG. He’s great in the bad Walter Hill prison boxing movie UNDISPUTED (see above). And he’s great in this terrible straight to video action movie where he’s a traumatized veteran who gets injected with a drug that makes him think he’s back in the shit during the Bosnia conflict.

Well, maybe saying he’s GREAT is pushing it, but he definitely rises above the material. The movie itself is unimaginative and light on thrills, directed sort of like the recent gloomier Seagal pictures, sort of a Shannon Tweed noir atmosphere with occasional way too short action scenes. And right in the middle of this gloop is Wesley Snipes giving an actual acting performance, something I don’t think I’ve ever seen in a bad straight to the garbage pile action movie like this. But I expect no less from Wesley Snipes, because Wesley Snipes is unstoppable.

The character Wesley Snipes plays in UNSTOPPABLE is another case though. It is not clear whether he is unstoppable, or in fact stoppable. Because really nobody is trying to stop him from doing anything, and he’s not trying to do anything that anybody would try to stop him from doing. There is no stopping or attempted stopping, the movie just isn’t about that.

Wesley plays a traumatized soldier who used to go on special ops type missions for the CIA. And unless I misunderstood something, these rogue CIA guys (or somebody) are trying to make sure that Wesley did not find out anything about their drug deal the time they executed his best friend in Bosnia. So for some reason they inject him with the drug they are selling, then he gets loose and comes back after them to try to get the antidote before his brain fries. Maybe they can’t stop him from doing that. But if their goal was to stop him from getting the antidote, they shouldn’t have injected him in the first place. Then he wouldn’t even be thinking the word antidote let alone trying to get one.

There are many interesting directions you could go with this premise, so what they do is, they don’t go in any of those directions. What happens, he’s waiting for his gal in a coffee shop and the CIA guys are tracking him. They immediately notice that he notices them, and we the audience believe in our hearts that there is about to be a serious one man vs. an army ass whupping scene. Unfortunately, this never really materializes. Wesley gets shot up with the drug and becomes disoriented. Still, he manages to escape and fight a couple guys. Good but too quick. He starts to flash back to when his friend (also his girlfriend’s brother) was executed by these guys in Bosnia. And he doesn’t know the difference between the past and the present. So we start to think, okay, it’s gonna be kind of a psychedelic spin on FIRST BLOOD. He’s got the post-traumatic stress disorder but also he literally thinks he is still in the war, because of this drug.

But he doesn’t really go on too much of a rampage and too easily figures out what’s real. And the movie is too much outside of his point of view. We know exactly what is reality and what he thinks is reality, and we spend too much time with the people who are following him and not enough with him being followed. So for the third time in a row you got a Wesley Snipes movie without enough Wesley Snipes in it (I’m not counting ZIG ZAG because it’s not his fault they put him on the cover of a movie where he only has a cameo.)

This movie is not nearly as good as BLADE III or even UNDISPUTED, but once again, Wesley Snipes is great. In the opening scenes he is both charming and troubled. When he’s drugged out, he seems genuinely tormented and deluded. When he fights with his fancy Capoeira moves he seems like a real badass. As far as being an entertaining action movie, this is worse than the worst Seagal picture. But Mr. Snipes’s talent as an actor makes it seem almost legitimate.

(A side note. While checking the spelling of Capoeira on IMDB I learned two Wesley facts: 1. He was mad at John Singleton for not casting him as Shaft. Come on Wesley, you woulda done great, but Sam Jackson did too. 2. His apartment was destroyed when the world trade center collapsed, and he would’ve been there but he was “delayed” at the gym. This is not a direct quote from the IMDB but I think we can all read between the lines and realize what this means: that the good Lord was as pumped as we were for BLADE II.)

Let me tell you the point when I had to give up on UNSTOPPABLE. Wesley gets captured, and exactly like in BLADE III, he is strapped to a chair with his hands shackled behind him, drugged up, being interogated by his enemies. When this happened in BLADE III, it was a little bit frustrating because the Nightstalkers rescued him. I mean I know that’s a pretty tough corner to be painted into but if James Bond can get out of that type of shit, then so can Blade, in my opinion.

Well here we got Wesley Snipes in the same situation again, so I’m thinking okay, now we’re talking. Now we’ve got a second chance, we’re going to find out how Blade would’ve gotten out of this if they had just treated him like an adult and given him a couple more minutes.

Then his girlfriend came in and saved him.

Let me say this. Only Wesley Snipes can save Wesley Snipes. Nobody is gonna come crashing through the window and rescue him from a career making movies like this. He’s just gonna have to swallow his wallet and start picking his roles better. He’s gotta find more Blades and he’s gotta stay away from the others. I mean if you want to send me the script and have me look it over for you Wesley, I’d be happy to do it. But I think you know how to turn down something like this. It is not only your right but your solemn duty to your fans, to your art, to your country, and to orphans, etc. And I’ll tell you why.

Every couple years the entertainment magazines are writing about who’s gonna be the next big action star. Are Arnold and Sylvester gone forever, is Vin Diesel gonna take over, is The Rock gonna take over, does America want less muscular acting talents like Matt Damon? If Wesley would get his shit together nobody would have to ask this question. Here is a legitimate actor who is also a bad blackbelt motherfucker. Some of these guys are okay actors but laughable as badass action stars. And the guys who are only known as action stars, you laugh at the idea of them trying to do a serious role. Schwarzenegger, Stallone, Seagal, anybody like that, it’s funny as hell when they play a scientist or a doctor or something, because you don’t believe they are smart.

But Wesley Snipes can play smart, he can play professional, he can play half vampire. He can jump out of a plane or crash through a wall, he can also bring his daughter to school or have to admit to his wife that he cheated on her. He is exactly what we need, he just needs to find the movies that take advantage of his natural Wesley Snipeness. In 1998, he went out there and made it happen. And I could watch Blade sequels for as long as I live. But there is a whole world out there Wesley Snipes. Crying out for you to conquer it.

I believe in you, Wesley Snipes. Let’s get it together bud.

DTV Wesley Snipes
This entry was posted on Wednesday, December 29th, 2004 at 7:40 am and is filed under Action, Drama, Reviews, Thriller. You can follow any responses to this entry through the RSS 2.0 feed. You can leave a response, or trackback from your own site.