The whole thing was pretty mysterious. There were some distant, blurry photos, but no press were allowed during the party. Some fans criticized it because it was attended by many celebrities, and because a whole bunch of police and security people kept the fans away. At least one thing I read complained because John Kerry was apparently there. They said Hunter would’ve hated it. 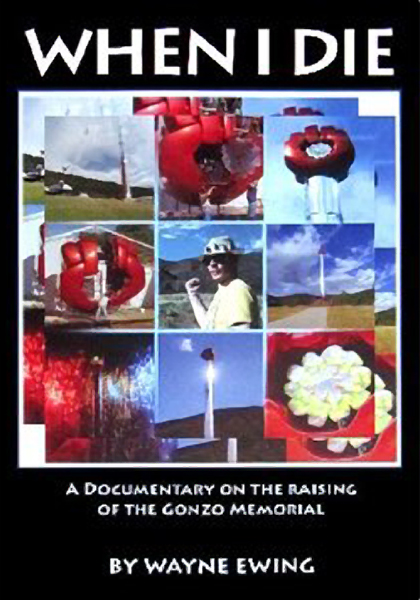 And maybe so, but who the fuck knows. This thing was put on by his family and friends, for his family and friends, so who the fuck are we to think we should be able to crash or tell them how it should be done? Hunter himself was a celebrity, he hung out with celebrities and politicians, he had two Hollywood movies about him. The last thing he wrote was an espn.com column about calling Bill Murray in the middle of the night. He had predicted in Rolling Stone that John Kerry (who he was acquainted with him since the Vietnam protest days) would become president. And he was happy about it. Ah shit, there’s two deaths for us to be bummed about.

Anyway, in all the hubbub I remember reading that Wayne Ewing, the director of the great Thompson documentary BREAKFAST WITH HUNTER, had been allowed to tape the making of the Gonzo Memorial, and his film about it had shown at the Whatsisdick International Film Festival in Somewhereville, North Wherever. But I didn’t know until just now that he had put it out on DVD already and sells it on the Breakfast With Hunter web sight.

Now be aware, this is not the same kind of movie as BREAKFAST WITH HUNTER. Hunter is only seen in the beginning and end, in footage we’ve already seen. It does not spy on the memorial service. Johnny Depp is mentioned many times, but never seen. No mention of John Kerry. Actually, no famous people at all.
Really this reminds me most of the Maysles brothers movies about Christo. Because it’s just showing the construction of this big fuckin statue. And it has the scene where the people in charge have to meet with the locals and get permission to do this crazy thing. Some of the Christo movies have class and culture tension between this crazy European artist and the regular joe working class construction workers he relies on to build those giant things he builds. This is kind of similar, there is this Hollywood event coordinator guy in charge and he’s not exactly fitting in, so it gets funny.

The part that made me squirm the most was the meeting between the event planner and the Woody Creek community leaders. He has no chance of hiding that he’s an outsider and doesn’t understand these people. One of the locals very calmly pokes a hole in him by making him admit that he did not know Hunter and then asks “Is all this necessary?” The Hollywood guy has an air tight argument: this is what Hunter had planned for years (we don’t see him mention that it was also in his will), and furthermore they have to remember that although the guy is a beloved neighbor and friend to Woody Creek, he is also beloved by the world for his writing. But even armed with these points the guy seems completely unconvincing. Luckily, the other locals seem to understand that this is what Hunter asked for, not just some random excess dreamed up by Hollywood bloodsuckers.

Alot of the movie is also about this guy worrying that paparazzi have rented helicopters and will buzz the ceremony, and he has many tense phone calls about it. It’s not really clear if he’s right or if he’s just a paranoid freak. There’s one scene where he announces, with no trace of humor at all, that if they won’t declare the ranch a no-fly zone he will find out who made the decision and rent a helicopter to buzz their house. And he specifies the times of day and the length of the buzzing. Like he’s done it many times and knows exactly the best way to do it. Some Hollywood asshole version of the mafia.

This guy makes you wonder if maybe those people who thought the service was bullshit might have a point. I mean, if you saw BREAKFAST WITH HUNTER you remember how Hunter terrorized Alex Cox for wanting to have animation in his movie version of FEAR AND LOATHING IN LAS VEGAS. And trust me, Alex Cox is much more down than this dude. You can only imagine what would’ve happened to this guy if the doctor had to work with him while alive.

But the dude means well, he seems to do a good job in the end, and the other people involved are much more sympathetic. There’s Thompson’s very young widow, who does alot of sweet, symbolic rituals to honor her husband, and politely brings watermelon slices for the boys while they’re building the statue. You have these daredevils who climb 150 feet up the thing, risking being struck by lightning, trying to piece it together and at the same time keeping it covered up so nobody knows what to expect. And other regular people from Woody Creek, like a bartender who stocks the refrigerator for the party, complains they don’t have the right brand of beer, and talks about what a sweet guy Thompson was.

There is no dwelling on the circumstances of his death, and in fact it’s not even mentioned until late in the movie, casually, that he committed suicide. But there are a few hints dropped in conversations that it probaly wasn’t a sudden decision, that he may have been planning and preparing a little bit. Which is kind of a consolation to me, actually, because it bums me out to think he might’ve just blown it with one of those crazed drug bouts he describes in so many of his books. I’d rather think he knew what he was doing.

I saw a guy on IMDb complaining that the movie doesn’t have Hunter Thompson in it. But that’s actually the genius of it. As nice and as well meaning as all these people are, they are not Hunter S. Thompson. They all come together to do this last crazy thing that the doctor asked for, but they are regular human beings. They are confined by the laws of physical reality, so they have to use foam rocks to create what Hunter envisioned as a 100 foot pile of rocks. They can’t risk starting a brush fire, so they have to compromise on the size of the fireworks show, thus disappointing those critics I mentioned before. They can’t piss off the sheriff or the neighbors so they have to do what they can to keep it private and prevent a flood of crazy, drugged out pilgrims from showing up. If Hunter could’ve been alive to throw his own funeral, I’m sure it would’ve been one hell of a party. But that’s not usually how it works. The guy has to be dead first. Sad, but true.

So if you miss the presence of Dr. Thompson then the movie is doing its job. It depicts perfectly how we’re all still here, thinking about him, and he’s gone. A smart tribute to a guy who will never be matched.

Hunter S. Thompson
This entry was posted on Thursday, September 21st, 2006 at 3:14 am and is filed under Documentary, Reviews. You can follow any responses to this entry through the RSS 2.0 feed. You can skip to the end and leave a response. Pinging is currently not allowed.

One Response to “When I Die”