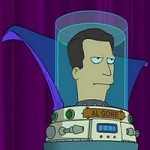 Vern got a look at AN INCONVENIENT TRUTH – Al Gore’s cinematic admonition regarding the various ecological “crises” facing our world today.

Regardless of politics, anyone who uses FUTURAMA as a learning aid (as Gore does here) is aiight in my book!

This summer there will be many exciting movies you can watch. There will be guns, cars, pirates, snakes, probably Superman or somebody, maybe Spiderman will show up, maybe a time machine or space ape of some kind. These are all thrilling scenarios, but I got another one for you. What about a movie about A GOD DAMN GLOBAL CATASTROPHE? Cities under water. Whole lakes drying up. Glaciers disappearing. Hurricanes and tornadoes, bugs and diseases, miscellaneous terror. Pretty much everything horrible except giant snakes and killer bees. Innocent polar bears drowning right and left. A fuckin’ nightmare. 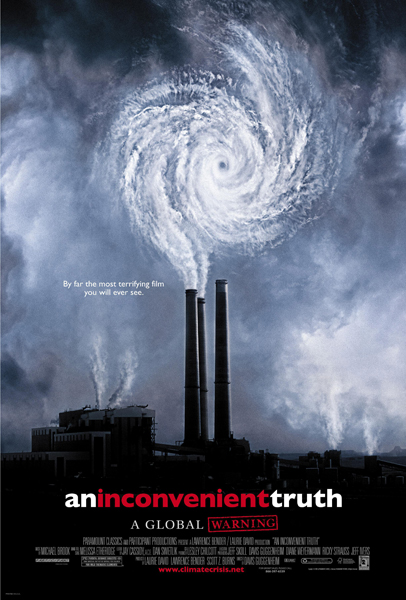 Bam. Sleeper hit of the summer.

Okay, maybe you aren’t getting a “geekgasm” or “nerdboner” or “semen stains” over this particular movie. Maybe you are, maybe you aren’t. But AN INCONVENIENT TRUTH, or AL GORE’S SLIDESHOW as I would have called it, is a good movie. And usually I wouldn’t want to say corny bullshit like this, but you could say that it is An Important Movie. I read a lot of things this week saying that it is important to watch the UNITED 93 movie. Well I wouldn’t know anything about that but it is definitely important to consider the issues that AN INCONVENIENT TRUTH addresses. Unless you are some kind of earth hater and polar bear drowner. And I don’t want to be controversial, but FUCK polar bear drowners. You suck.

AN INCONVENIENT TRUTH is almost like a concert movie. Apparently since college, Al Gore (former vice president of the United States, looks like Superman*, etc.) has been very concerned about climate change. And over the years, especially after 2000 for some reason, he has been traveling around doing this slide show demonstrating through charts and diagrams and photos and etc. a very convincing argument. He argues that somehow the near-unanimous scientific community are actually right that we are causing climate change, and that the guy who did WESTWORLD is wrong. (He doesn’t specifically mention that guy though. Sorry bud, maybe some other documentary.)

So most of the movie is basically a live performance. Al Gore in a high tech lecture hall doing a slide presentation. There are even behind-the-head shots of him walking down twisty backstage corridors to get to the stage, like any other concert movie. And you see him in airports and on planes. On tour.

The main thing that is emphasized is not just “this is happening” but “this is happening now.” He says that if we do not make a dramatic improvement within ten years, we will hit a point of no return. And personally, I would like to return. Your mileage may vary. Only metaphorical mileage though, don’t be driving all over the fuckin place if you don’t have to, that’s part of the problem.

Think about it, if there is no earth, what are all those comic books you’ve been saving gonna be worth on ebay? NOTHING.

He also emphasizes the idea that this is a moral issue. It has nothing to do with left wing vs. right wing, Bush vs. Stephen Colbert, Coke vs. Pepsi. It’s an issue that most of us agree on and need to unite over if we want to get the problem solved. It’s about not fucking over your kids and grandkids. It’s about not being an asshole. It could even be about Jesus if you wanted it to be, because Jesus said “don’t be an asshole” (paraphrase). I’m not saying you have to see the movie to not be an asshole, but you do have to consider what we are facing here and what we can do about it. And watching the movie might help.

Climate change is not a partisan issue, but that’s also the problem with this movie. Because, fair or not, the fact that it’s all about Al Gore is enough to divide any potential audience. I think there are alot of republicans who would never watch this movie because it’s about Al Gore. There are still people pissed at him because he didn’t want to stop counting the votes in Florida. And there are people on the other side, we will call them “people like me,” who are still pissed at him for only wanting to recount the counties that favored democrats, instead of recounting all of the votes in the state. That would’ve been the right thing to do and also would’ve won the election and saved us a little trouble here, in my opinion. You guys know what I’m talking about. Starts with an ‘I’ and ends with a ‘Q.’ That place where the major combat missions ended three years ago Monday.

Of course, that last paragraph guarantees that this review will have the worst talkback of all time. But I think that would’ve happened even if I never mentioned 2000 at all, and that’s my point. To most people, the sight or mention of Al Gore brings up old arguments and emotions about the, uh, Y2K problem. And that shit is irrelevant to this movie. So it’s a big hurdle to jump over in order to get the movie’s message across.

Not that the movie tries to dodge that. It’s mostly the slideshow, but every once in a while it veers off into biographical information about Gore, showing how he got interested in this issue and telling some personal stories that make it hit home a little more. I especially like the scene about growing up farming tobacco and why his father eventually decided to stop growing it. The charts and maps might scare the shit out of you (it’s like a Halloween party at the science center) but the real human being stories are more interesting if you ask me. Anyway they take that approach so there is a little montage about the 2000 election in order to show when he decided to really dedicate all his time to environmentalism. I was surprised the people at the screening – mostly lefties, I’m guessing – were able to restrain themselves from booing. I guess that shows that the movie is pretty involving, especially for a movie about slides.

There has been a whole slew of politically oriented documentaries in the last, say, six years. It is hard to say why, nobody really knows. I am as liberal as they come so I agree with alot of them, but I don’t necessarily like them. For example I’m not a big fan of the Robert Greenwald documentaries like OUTFOXED, UNPRECEDENTED and all those ones. They’re important topics but they’re cheap ass movies. AN INCONVENIENT TRUTH is not like those ones. It’s simple, but it’s classy. It feels more like a real movie than those.

I actually liked the documentary footage of Gore talking on the phone and riding on a plane and shit, because that’s my type of documentary, the Maysles brothers type shit where they just show what somebody does in real life. But including even the small amount they have of this type of scene was probably a mistake as far as the mission of this movie. You need to get the message across to people who don’t give a shit about Al Gore, and even to people who despise Al Gore. Maybe they should treat this like a Japanese horror movie and remake it with Naomi Watts.

One thing I should mention, I know a thing or two about Al Gore’s reputation, but this movie is not as dry as some will expect. Yeah it’s a serious talk about a serious topic, but the dude is not without a sense of humor. He has some good visual methods of explaining things and even uses a clip from the “Futurama” cartoon to explain the concept of global warming. One thing that would’ve been cool would’ve been if he still had that crazy beard he was sporting for a while. Or if he would swing around on a rope above the audience during his presentation. Maybe some pyrotechnics or a jetpack or something. To be fair I’m not sure how environmentally up to snuff those things are, it might seem hypocritical for him to be flying around on a jetpack and then complaining about the CO2. So he probaly made the right decision on that.

After the screening one of the cast members, Al Gore, came out for a question and answer session. He actually seemed pretty cool. He didn’t seem like he was running for president, and nobody asked him if he was. I forgot what it was like to watch a politician or politician-like individual stand and take questions and then answer them knowledgably. He would not only answer the actual question, but would illuminate it with all kinds of detail, showing a great knowledge of science, history, politics, and even making a relevant comparison to The Sopranos. I also realized that the guy who did the impression of him on Saturday Night Live was very accurate. But the point is I have never been a big fan of the guy but I was impressed by him in the movie and in person. Still would’ve liked to see the beard, though.

Anyway, I hope Al Gore gets his way and saves the world and what not. The way I figure it, there is no reason not to get on board with this shit. Even if you are like the westworld guy and refuse to believe what the non-fiction scientists are telling us, I don’t see what the problem is. What is it going to hurt you to get better mileage on your car, trim down your energy bill, have less smog in your city, have cleaner rivers, etc.?

Unless you are terrified of pandas and owls someday overrunning our cities and eating our children, why not get in on this. Even if there was no global warming, you have every reason to want to conserve energy and be less dependent on foreign oil. You can even be greedy about it, because new technology means money. People will get rich off of developing cleaner energy technologies. Even Bush has figured this one out, he’s gonna be all over squeezing big bucks out of his magic corn powered cars or whatever it is. After he stops steroids.

For the reasons I mentioned, AN INCONVENIENT TRUTH is maybe not the perfect movie for making people take this issue seriously. But it’s a good one. It definitely worked on me. Leave those polar bears alone you fucks.

*Chris Tucker pointed out back in 2000 that Al Gore looked like Christopher Reeve. He said if Gore would make his speeches wearing a Superman costume he would win. I never forgot that even if superman is looking a little chunkier these days.

This entry was posted on Wednesday, May 3rd, 2006 at 8:26 am and is filed under AICN, Documentary, Reviews. You can follow any responses to this entry through the RSS 2.0 feed. You can skip to the end and leave a response. Pinging is currently not allowed.