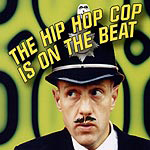 This movie is not exactly that story, but almost. It’s about a special task force of the NYPD set up specifically to spy on famous rappers. At first the movie kind of seems like it’s full of shit. They interview various A-list and B-list rappers who sort of brag about getting harassed by cops. In particular I noticed there was a white dude named Pitbull who bragged that “the hip hop cops” must be following him, he bets, in his opinion. I almost turned the movie off at this point figuring this was going to be the level of documentation they were willing to settle for. Some dumbass white rapper you never heard of claiming that MAYBE people are spying on him. Not because he has noticed being spied on, but because he’s fuckin PITBULL, man. Why wouldn’t they spy on him?

But then right away the movie actually proves that it’s not full of shit. They talk to some journalists in Miami who were the first to prove the existence of the long rumored “hip hop cops.” It started with a reporter who did a profile on some local rapper, and later she received a letter from the police department asking for contact information on this rapper, and the letter specifically stated that it was for a database the Miami Police Department was keeping on rappers. The reporter was smart enough to realize there was a story there and investigated until she uncovered that the Miami rap squad had been trained by the long-rumored-but-never-before-proven-to-exist task force in New York. And specifically she found a retired cop named Derrick Parker who had started the task force. Apparently the NYPD still hasn’t officially admitted to its existence, but Parker and other retired cops tell all about it. None of them think there’s anything wrong with the task force so they’re pretty open about it.

Most of the movie is interviews with Parker himself, and he’s an interesting character. He likes rap music and had schmoozed with many rappers, even tried to have a musical career at one point. But as a second generation cop he decided to parlay this interest into spying on and harassing his favorite rappers. After Notorious BIG was murdered the police decided to pay more attention to what’s going on with these rappers. Seems reasonable enough, but it quickly went from trying to learn more to a kind of COINTELPRO type vibe.

Parker tried to keep tabs on every rapper in New York and compiled a fat ass binder with photos, addresses, acquaintances, social security numbers, associated vehicles, criminal record, etc. They put rappers under surveillance, you know, to learn about their culture. There are people in this thing like Wyclef and Missy Elliot. People who are probaly not gonna be shooting up the joint, in my opinion. In fact I am pretty sure there is a 400% higher chance of either one of them starring in a sitcom or doing a voice for a cartoon animal than shooting, stabbing or karate chopping a motherfucker.

My favorite part of the movie is when Parker agrees to meet with a representative from the ACLU. He gives a half-assed defense of the program, pointing out that all of the people have a criminal record. (I don’t think this is actually true, they mention that Missy Elliot doesn’t have a record.) He can’t explain though why this means they should be perpetually under suspicion or spied on at the airport or why there’s a binder on all the rappers but not on, say, CEOs of corrupt corporations. He starts to say that rappers should be investigated because of their lyrics, but catches himself and backs off. Then he tells a story about some rappers being harassed because of a song about Giuliani, but can’t seem to understand why the ACLU guy doesn’t like that story.

It never rises to the level of great documentary, but it’s an interesting subject and main character. It’s not the direct cinema style I prefer, it’s all interviews, but they find some creative ways to do it. Like when they let famous rappers flip through the binder and laugh at their files. John Lennon never got to do that. They definitely could have gone deeper into the subject, but it’s better than you might expect from this type of straight to video release. This is produced by Quincy Jones the third, who has done a whole series of these hip hop related half ass documentaries.

Unfortunately the movie has a bummer of an ending. But before I describe it let me tell you a story. One day I was headed home on a crowded bus, and there was a young dude and a middle aged woman who apparently lived in the same apartments, having a loud conversation about their landlord. Yeah, look out for him. He was supposed to fix the heater and he kept not fixing it. Then he went into my apartment when I wasn’t home and some of my money was missing. He keeps knocking on my door at 11 at night asking for money. Can you believe that? He came into my apartment without knocking. Yeah, he does that to me all the time. That guy creeps me out. etc. etc.

The conversation got more interesting when a third guy suddenly interjected. He said “If I found out one of my managers was doing that, I would fire his ass.”

The other two said yeah, and continued with the anecdotes of what horrible things this landlord supposedly keeps doing to them.

“Seriously,” says the third guy. “I’m a supervisor for apartment managers, that’s my job. If this guy is doing what you’re saying, it’s completely illegal and I would never let him get away with it. You need to report him so he can’t do that anymore.”

And he starts telling them exactly what they need to do, who they need to talk to in order to stop this injustice and be treated fairly under the law and that kind of thing. I couldn’t believe it. What are the chances you’re gonna be in a bad situation and talking shit about it on a bus and happen to be overheard by a concerned person in a position to do something about it? It was amazing. I couldn’t believe their luck.

And they said I know, totally, this guy is so shady, and just complained more about the shit the guy did. They didn’t even acknowledge what the guy was saying. And they kept talking about it as they got off at their stop. They were totally oblivious. They just wanted to top each other’s stories of a bad living situation and show off on the bus about how they live on the edge and what not. They had no interest in making it better.

BLACK AND BLUE ends with that same type of bummer. The narrator (who by the way is Saul Williams, the great poet and star of SLAM) tells us that the ACLU is filing a lawsuit against the NYPD over this task force. But he says not to expect many rappers to help out. Then they go back to the interviews with all the rap stars they’ve shown throughout the movie, and they all back down like petty punk bitches and say how well I’m really not a lawsuit kind of guy and nah I really wouldn’t want to mess with that and you know, it’s hard out here for a rapper and the man is always gonna keep me down so I’m used to it and I can’t really do anything anyway because I’m busy this week polishing my custom made ten million dollar car made out of diamonds that only runs on rare sheep clone blood.

These are people who make a ridiculous living by bragging about how tough they are, how unstoppable they are, how no motherfucker better fuck with them. But they let this chubby balding dude who used to know Heavy D fuck them left and right. What was that line Jay-Z said? “You know the type, loud as a motorbike, but couldn’t crush a grape in a food fight”? I challenge you fuckers to challenge this bullshit. You can’t sit around dusting your jewelry and drinking out of pimp cups all day letting Al Sharpton and Russell Simmons do all the important work. I mean come on rappers. Get it together. Take a stand. If nobody does it I’m taking your movie acting priveleges away.

hip hop
This entry was posted on Friday, February 24th, 2006 at 7:12 am and is filed under Documentary, Reviews. You can follow any responses to this entry through the RSS 2.0 feed. You can skip to the end and leave a response. Pinging is currently not allowed.