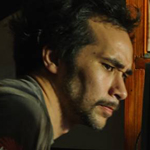 During filming, I was astounded at his professionalism and focus. He would dole out wordless directions to his team of stuntmen, who responded to his gestures and his hand motions. I watched him silently describe the movements of fragments of a fight scene to his team, who simply nodded their understanding, and when director Isaac Florentine would call “Action!” Man’s team would reply with their physical feats of motion during the fights before the camera. It was amazing. Scott Adkins and Kane Kosugi, the stars of the film and the focus of the scene, would gravitate towards Man’s intensity during the brief moments where he would (again, wordlessly) describe the martial arts movements the scene required, and I stood there watching him in his element. There’s a good reason why Florentine ultimately chose him to choreograph the fights for the film.

Tim, tell me about your character, Myat, in Ninja 2.

He is on the right hand of another character named Goro. He’s his personal bodyguard. Goro is one of the main bad guys in the movie.

Well, there’s a lot of fight scenes in this movie. I’m creating all the fights, I’m handling all the stunts, planning the safety of the stunts.

How are you making the fights special and unique? The stuff in the first Ninja was impressive. What are you doing to make the fights in this film even more spectacular?

I had a discussion with Isaac. He told me that he didn’t want the fights to be so Japanese. He wanted them to feel a little more like his Undisputed movies and The Raid. In the first previews I did, I went more in that direction, but when Isaac saw them, he went, “Nah – it needs to be more Japanese!” I was like, “Okay … ” I was a bit confused. It took awhile before I understood what Isaac wanted. Once I understood what he wanted, it was pretty easy to find the style that he was looking for.

What is the style he was looking for?

The first Ninja was quite bloody, but Isaac was telling me that they’re going for a PG-13 rating for this film. How are you able to adapt that rating to the style of the fights and the brutality in this film?

I actually didn’t know that until a week or two before shooting, so everything I’d planned was to be bloody and stuff, so I had to take down the blood, but we kept what I’d planned.

How’d that make you feel to know that the film would be PG-13?

I’m okay with that, but I’d rather see the movie with NOT a PG-13. It would be more awesome, you know?

Yeah, big fan. The way he shoots his movies. I think he’s amazing. Most of the directors I’ve seen, they direct a fight scene – I’m talking about the western directors – they basically cover the action. They set up a master shot and they pick some stuff up to cover the action, but Isaac is actually directing the action. He’s telling us where the camera is gonna come, and how we’re gonna move. It’s good to see this. It’s not often that you see this. 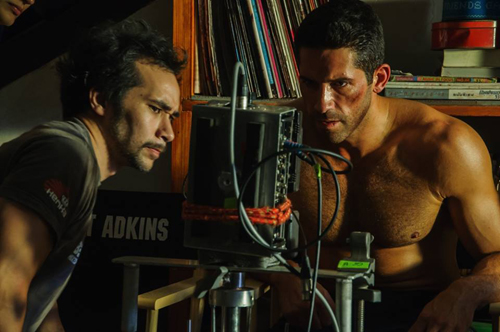 Talk about working with Scott Adkins.

What can I say? Everybody knows Scott. He’s super talented. He can do everything. I just show him the choreography, and he knows it. He doesn’t need to practice much – he’s got everything down. He’s an easy guy to work with.

Talk about working with Kane Kosugi.

I think it’s interesting that you’re acting in the movie, and you’re coordinating the stunts. Tell me how you’re able to juggle that.

Luckily, it’s a small part in the movie, so I’m focusing on the fights. By the end of the movie, I think is when I’ll be filming most of my part, so luckily I can focus on the fights now, and then my part later.

Tell me a little bit about your background as a martial artist.

I started when I was six years old. I started with judo and jiu jitsu. At that time, it was just playing around. I didn’t understand why I did it. But then, when I was eight, I started Tae Kwon Do, and I met my teacher. I basically started training really hard. I trained in his family style, which was a Vietnamese style, Viet Vo Dao. From there, I did boxing, I did Wushu, stuff like that.

How did you get your start in the movies?

I was doing a lot of shows. I was called up when I was in Sweden to do some background stuff for a shooting. On that, I met a stunt coordinator. We started talking, and over a few years, we talked and I started being his apprentice. He taught me everything about cameras.

How are filmmakers utilizing your look? You look different than anyone else in the movies, you’re very distinct looking. Are you going to be the bad guy forever? Do you want to play a good guy once in a while?

Say something about Kill ’em All.

I’d just made a movie in Italy. It was the first martial arts action comedy ever in Italy. When I was doing that movie, the director contacted me and asked me if I wanted to do the action for this movie Kill ’em All in Thailand. There was this character The Kid that they were having trouble finding an actor for. He asked me if I would do it, and I did it.

What can fans of action movies and martial arts movies expect from Ninja 2?

david j. moore Tim Man
This entry was posted on Wednesday, September 25th, 2013 at 1:01 am and is filed under Blog Post (short for weblog). You can follow any responses to this entry through the RSS 2.0 feed. You can skip to the end and leave a response. Pinging is currently not allowed.

One Response to “Interview with Tim Man, stunt choreographer on NINJA 2 by david j. moore”