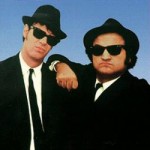 Remember John Landis? John fucking Landis? The guy who directed THE BLUES BROTHERS and AN AMERICAN WEREWOLF IN LONDON back to back? I was never much of an ANIMAL HOUSE man myself and I know most of the rest was a mixed bag but MAN, those two movies– that’s enough to call the guy a genius I think. At least, a former genius.

But then there was the helicopter accident, and there was the ’80s, and he hasn’t had a hit since COMING TO AMERICA. In fact his last movie that got any attention was BLUES BROTHERS 2000 which I think we all agree he shouldn’t’ve made, unless he just made it as a personal home video for him and his friends. Then it would’ve been pretty great.

But John Landis is still alive and working and he even looks exactly the same and to everyone’s surprise, probaly even John Landis’s, here we have a genuine good John Landis movie in the year 2004. The movie is called SLASHER and it is actually a documentary made for the Independent Film Channel, a famous cable channel that I do not get. 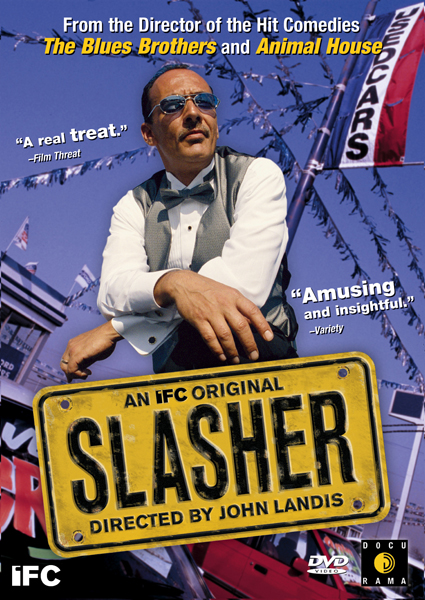 SLASHER is about a guy named Michael Bennett, whose occupation is a “slasher” and whose nickname is “Slasher.” He’s an independent contractor who goes around and stages big “slasher sales” at used car lots to get rid of their “stale inventory.” Basically they markup all the cars, then he goes around in a tux with a toy chainsaw and “slashes” the prices to lower them to something closer to reasonable, so that it seems like a good deal.

After a brief introduction to Slasher (juxtaposed with famous lies from Nixon, Reagan, Bush, Clinton, and Bush part 2) and a soulful opening credits sequence we go to Chuck Hutton Toyota in Memphis, Tennessee where the salesmen talk in awe about “the slasher” and the miracles of car salesmanship they’ve heard he will perform. Then we go back to Slasher who talks a big game in his raspy voice, bragging about selling 50 cars in 4 hours, talking about his “mercenary car salesman” he brings with him, etc. We find out he only sees his wife and kids about 6 days a month. He has to travel all the time but that’s because he’s the best at what he does, he’s a bad motherfuckin slasher.

And he storms into that place and he gives everybody a big speech and he acts like a rock star, staying in hotels, staying up late getting shitfaced in strip clubs. And then when the actual sale starts we find out that maybe he isn’t as hot as he says he is. For a while he seems confused and the customers seem impatient with him. He’s just some obnoxious asshole in a tux ranting into a microphone.

He brings a DJ with him, a big quiet dude who usually looks completely disgusted by Slasher, and keeps telling him to shut the fuck up.

To promote the sale they use a gimmick that some of these cars, and nobody knows which ones, will sell for $88. But this is a poor part of Memphis and it’s the Bush economy, so most of the people come in only interested in finding the $88 car. A pretty young girl in a fuzzy Kangol hat gets one of them, and the camera crew follows her home… the thing breaks down as soon as she pulls into the driveway. Something explodes while her uncle and brother look at the engine.

There are a bunch of reasons why this movie is interesting. There’s the whole ridiculous drama of the sale, and the possibility that this slasher will let the car dealership down. There’s the salesmanship tricks, the personalities of the different salesmen, the funny clashes with the customers (one skeptical customer happens to be wearing a shirt that says “fed up” on the back – on the commentary track they say they were worried people would think they asked her to wear it). There’s the culture clash between the people of Memphis and these hotshots from out of town. There’s the relationships between Slasher and his team.

But most of all this movie is interesting because this guy Slasher is a fuckin maniac. During the sale he’s running around in a tux and shades, hassling people, constantly sucking on bottled water, sometimes obviously drunk. He’s a hyperactive chainsmoking alcoholic egomaniac – never stops moving, never stops talking shit. “Even when I’m sitting still I’m moving,” he points out as he squirms around during a sit down interview. During one desperate moment he runs out into traffic and tries to wave cars into the lot. He’ll mutter things like, “Get out of my fuckin face” while wearing a microphone. He and his salesman Mud get in a fight while driving to the airport. You half expect him to stab somebody while on the job.

You kind of expect there to be some fancy tricks to the game, but there’s really not. It’s all obvious. Everybody seems to assume they’re getting scammed the whole time.

And John Landis, I don’t think he’s done a documentary before, so this seems to reinvigorate the motherfucker. And it still kind of feels like a John Landis movie. The Memphis setting (and a visit to the Stax museum) is a great excuse for him to unload his beloved soul music on the soundtrack.

On the commentary track they reveal a few cheats that were done in the movie. As Slasher and friends leave it starts to rain, and there are some moody shots of rain pouring on the cars in the lot. But it turns out this is actually a different lot clear over in California. That’s disappointing but obviously doesn’t take anything away from what you’ve already seen. Of course, if this was an anti-Bush documentary that would be proof that JOHN LANDIS IS A FUCKING LIAR and THIS IS NOT A DOCUMENTARY, MORE LIKE A DOCU-SHIT-ARY, and all of the good points he made would now be wrong.

And in fact it turns out Landis originally made the movie in an understandable haze of Bush hatred. He wanted to make a movie comparing politicians to used car salesmen. But then he started following this guy and realized that he was interesting enough to be the whole movie. And in a way he is a good symbol for what’s going wrong in our country. Here’s this guy, charismatic but obnoxious. He’s got a great, loving family but he hardly ever sees them. Because he’s out there pursuing his passion: convincing poor people to pay too much for shitty cars. Sometimes people say you gotta be the best at what you do, but I think some things you shouldn’t fucking do, period. There’s no honor in being the best asshole, and that’s probaly part of the reason this guy hates himself and drinks beer for breakfast every day.

John Landis
This entry was posted on Saturday, December 4th, 2004 at 12:56 am and is filed under Documentary, Reviews. You can follow any responses to this entry through the RSS 2.0 feed. You can skip to the end and leave a response. Pinging is currently not allowed.

One Response to “Slasher”