The Werewolf of Washington 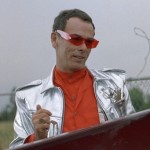 I was browsing through the horror section at this video store one day. I don’t know if many of you remember this, but there are actual video stores they have that you walk into and find a movie. You don’t just order them online and then wait for them to be delivered to your house. This old fashioned method requires walking and effort of some kind (sorry about that folks) but the cool thing is it’s spontaneous: you find something, you bring it home, you watch it.

Anyway I found this movie WEREWOLF OF WASHINGTON. Never heard of it before but it’s from 1973 and it’s about a Washington press secretary who gets bit by a werewolf and later bites the president. I immediately thought this movie was right up my alley. Not just because it would be funny to see Scott Maclellan take a bite out of Bush, but also because I always wanted to see a movie like this. A horror movie within the world of politics, like Jason Voorhees becomes president, or Dracula vs. America, or something like that. They always use horror as a metaphor for teenage life (Ginger Snaps, Buffy the vampire, etc.) or pretentious yuppie life (the films of Larry Fessenden) or AIDS (Dave Cronenberg’s The Fly) or occasionally Vietnam (Death Dream, maybe Last House On the Left). I can think of two movies, People Under the Stairs and Texas Chainsaw Massacre Part 2, that I think are on some level about Reaganomics. But I can’t think of any horror movies that are really blatantly and specifically about politics and politicians. And it turns out there is one, I just never heard of it before. 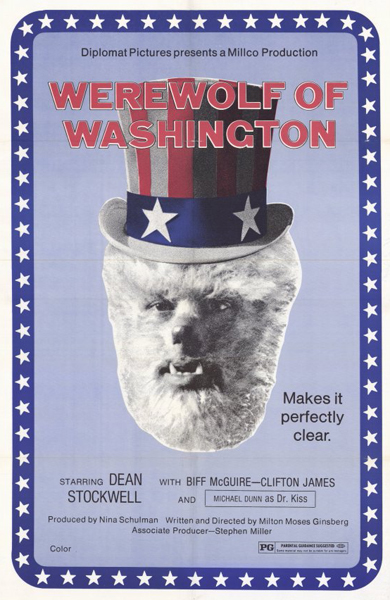 The quality of the dvd is maybe about rat piss, on a scale of apple pie to maggoty racoon intestines. If that makes sense. It’s bad anyway. Bad transfer, full frame etc. I think it was transferred from VHS and as the credits rolled I thought maybe this was actually a TV movie. It starred Dean Stockwell so I figured it must be a real movie. What was the other movie I saw recently where he looked this young? I couldn’t remember.

Maybe the most frustrating thing in renting movies is when you find a movie you never heard of and you get excited, picturing a certain type of movie in your head, and even if it’s not very good you think you’re gonna enjoy watching it. But then you put it in and it takes you all of 5 or 10 seconds to realize you might not even want to watch it at all. One example is this movie DARK HARVEST I rented, a killer scarecrow movie. I’m thinking some grimy ’80s gore movie or something, but it turns out it’s an early 90’s shot on video “movie.” About two minutes in I decided not to finish.

This was less extreme, because I watched the whole movie. But it became clear right off the bat that this is not really a Real Movie. This is a low budget, amateurish independent movie. Everything is bad: the acting, the photography, the editing. The timing is all off. There’s no sense of realism or atmosphere. The buildings the president is in do not look like buildings good enough for the president to be in. The police do not seem like real police and their investigation does not seem like the size of investigation you would have during a murder spree of prominent Washington figures. The werewolf makeup (a straight ripoff of the Universal Wolfman movies) is okay but Dean Stockwell looks ridiculous running around in a suit and tie growling at people. The way they shoot it it never looks like a real werewolf movie. It looks like a home movie of somebody’s halloween costume.

But I mean, this is a good idea. Obviously 1973 was a time when many Americans were suddenly catching on that their government was a bunch of corrupt bastards, crooks and killers. So why not a movie where at the end the president turns into a werewolf and tries to go on like everything’s okay? The storyline follows Dean Stockwell as he is promoted from reporter to White House press secretary. Meanwhile, he is realizing that on full moon nights he’s been going out and eating people. He tries to tell the president that he’s a werewolf and responsible for the recent string of murders, but he doesn’t believe him until the scene towards the end where the two are in a helicopter with the Chinese prime minister. The president is jabbering and keeps saying, “pay attention, Jack,” not noticing that the guy is transforming into a wolfman right there. Finally when he goes for the president’s throat, the commander in chief says, “You’re right Jack, it WAS you.”

It’s a funny joke, and there are other funny jokes. In theory. But the whole thing is just off. The timing is all wrong. Everything is wrong. It just doesn’t work. It’s not scary or funny or involving.

You know what it was, I saw a young Dean Stockwell in the Phillipine martial arts movie STICKFIGHTER. That was a terrible movie too. If I didn’t recognize him from tv I woulda thought he was just some white man they knew and put in the movie to add exoticism.

I guess what WEREWOLF OF WASHINGTON proves is that there’s more to making movies than good ideas. I bet if you knew this director, Milton Moses Ginsberg, when he was making the movie, you woulda thought the guy was a genius. He’s got this great idea, he’s making an independent movie, he’s going for it. Ambitious too, making a movie in Washington DC with the president and a werewolf and a helicopter. But Milton Moses Ginsberg is no George Romero or Tobe Hooper or Sam Raimi. He doesn’t have that natural knack for telling a story with images, for getting performances out of non-actors and Dean Stockwell, etc. He raised the money and he made the movie, which is more than you can say for most of us assholes. So good job on that one Milton Moses Ginsberg. But this is a pretty awful movie still.

Let me tell you what Milton Moses Ginsberg deserves. He had this great idea and effort and we’re gonna redeem him. Because somebody has got to remake this movie. Take the title, the basic premise, and do it right. Low budget is fine, but make it seem like an actual movie, not a home video. And modernized for today when Watergate is like a church picnic compared to what these maniacs do six times a day just between getting to work and their first smoke break. The right wing always pretends to think that Hollywood is out to get them. So get to it, Hollywood. Make their dreams come true. Give us WEREWOLF OF WASHINGTON 2005. We’re ready.

werewolves
This entry was posted on Wednesday, December 1st, 2004 at 8:51 am and is filed under Comedy/Laffs, Horror, Reviews. You can follow any responses to this entry through the RSS 2.0 feed. You can skip to the end and leave a response. Pinging is currently not allowed.