So I head to the movie theater because if there’s one man who knows how to blow smoke up America’s ass, it’s Jerry Bruckheimer. Now I’m not stupid. I seen Armageddon and a number of these other shitpiles this individual is responsible for. I knew what I was in for and I can take my lumps like a man. But this one sounded so god damn retarded it seemed like it would be worth my time. I guess. Well, it seemed to make sense at the time. 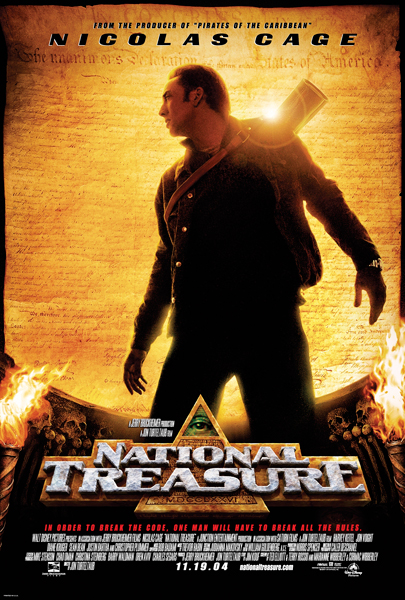 The ads tell us NATIONAL TREASURE is “from director John Turteltaub,” who it turns out is some dude who directed 3 NINJAS and COOL RUNNINGS. But in the tradition of Dick Cheney, the real man in charge here is Bruckheimer, who just Bruckheimers the shit out of this movie. Not in the sense of quick cuts and fetishistic gazing on heat trails and sunsets and crap. More in the sense that he takes the dumbest possible premise and is sure to tell it in the way that is most annoying and insulting to the audience.

If you haven’t heard the premise for this one, you’re gonna think I’m jerkin your chain, but please take my word on this one. Nicolas Cage plays Benjamin Franklin Gates (no, seriously guys) a fourth generation treasure hunter trying to find a massive collection of booty hidden by our nation’s forefathers. See, it turns out that Benjamin Franklin and those other dudes were heroic freemasons and Knights Templar, and the real reason they founded this country was to hide treasure because “they knew it couldn’t fall into the hands of the British.” Keep in mind that this is not magic treasure or anything. It’s just treasure. They hated the brits so much they founded a whole country to prevent them from getting too rich.

So yeah, they hid it, but I guess they wanted to be caught, so they left a trail of riddles and puzzles including invisible ink on the back of the Declaration of Independence and a clue on the $100 bill that tells you how to use the Liberty Bell to cast a telltale shadow like that staff did in RAIDERS OF THE LOST ARK. I guess that’s what this is supposed to be is Indiana Jones meets your fourth grade American History report. On acid. Or at least drunk. Or I guess punched in the face a bunch of times.

This has a PG rating. No boobs, no blood, no fuck words. It’s like it was purposely designed for high school history teachers when it gets near the end of the year, they get lazy so they show a movie and pretend that counts as learning.

Actually it’s a little like that horrible children’s movie THE GOONIES, where a bunch of whiney obnoxious little brats from Oregon run around whining about secret pirate treasure, and nobody believes them because they are stupid little kids. This is the same thing only it’s adults, and nobody believes them because their story is so dumb. Maybe this movie is what the kids from Goonies imagine life will be like when they are adults. I don’t know.

The worst part is that the filmatists don’t even have the courage to stand behind their asinine premise. So the characters constantly laugh at and make fun of it. When Benjamin Franklin Gates and his wacky sidekick Patrick Henry Powers (just kidding this time – his name is Riley Poole*) try to explain to the antique document expert/future love interest that there’s an invisible treasure map on the back of the Declaration of Independence, they get embarassed even explaining it, and she laughs at them. I mean think about that: the characters are ashamed to explain the premise of the movie. They might as well turn to the camera and say, “I can’t believe you dipshits paid money for this.”

Some day filmatists are gonna have to figure out that pointing out that your movie is bad does not get you off the hook. In fact, I’m gonna be more likely to forgive the guy who doesn’t point out that his movie is bad, because maybe he just didn’t know. How can I blame him, he didn’t know what was going on. You, Bruckheimer and accomplices, you knew it. You admitted it. I caught you motherfuckers red-handed.

Anyway, poor Nic Cage’s job in this one is to breathlessly explain bits of American history and how they tie in to the solutions to various riddles, and keep a straight face while doing it. His sidekick’s job is to point out that that is his job, and not keep a straight face, so that some members of the audience will be tricked into laughing.

The filmatists make the understandable assumption that if you are watching this movie then you are an idiot, so they explain everything more than necessary. We already know that Riley is the wacky sidekick, because all his lines give you that weird feeling that they are supposed to be funny. But in case that’s not enough for you, they make him wear Chuck Taylors with his suit. Sort of a visual indication that this is no ordinary suit-wearing dude, this guy is craaaAAAAZy.

When they mention the freemasons they don’t expect you to know who they are. They say “a secret society known as ‘the masons.'” Almost like you’re supposed to think they made it up.

For most of the movie, Cage is running around with the declaration of independence in a tube strapped to his back. His dad is played by Jon Voight (who gets to wear a funny blond wig in the opening to play an unconvincing 1974 Jon Voight). Dad is disillusioned about the whole treasure game, and sees it as just an endless line of clues leading to clues. I’m not sure how he knows this though, because Cage is the one who figures out “the secret is in Charlotte,” a clue passed down from his great, great grandfather. So which clues has Jon Voight been following all his life? Is there another treasure?

There is a part where Nic Cage uses the declaration of independence to block bullets. He also has the line, “The declaration of independence is not a bargaining chip. Not to me.” And there’s a part where he quotes from it in the same way movie characters usually quote their favorite poems, and the way real life people don’t quote anything. So there are some good unintentional laughs to make up for the bad intended laughs. Also during the end credits you are taken on a 3-D computer journey through the words of the declaration, like they are those lines of computer code from THE MATRIX. whoah.

At first Nic’s expedition is paid for by a Richard Branson type British millionaire adventurer guy. But then he and his men turn on Nic and try to kill him. So of course the whole movie has Nic Cage competing with the British for the treasure. Isn’t that ironical. The British just don’t understand the importance of all this Americana, either. What Nic calls “the declaration of independence,” they just call “the document” or even “the map.” Because they’re British. Take that King George.

In the end it turns out what America is all about is getting rich while claiming it’s in everybody’s best interest. They spread the treasure throughout the world (much like the fathers spread government among the people – whoah, that’s deep) but they take enough percentage to buy a huge historic mansion. (Wacky sidekick wishes they held out for more – ha ha get it? I don’t either.) And the freemasons are indeed a powerful secret conspiracy behind the scenes of our nation’s history, but instead of that making them spooky elitists they are some kind of super heroes like The Shadow or The Phantom or somebody. So it’s good to have them secretly running the show.

Along the journey there is a good plug for Urban Outfitters, where Nic and his love interest spend time trying on clothes and find that the cashiers are very understanding about loaning back $100 bills from the till in order to solve puzzles. There’s also a shoutout to Visa, but since that’s how Nic gets traced by the FBI, it’s probaly better to carry those Ben Franklins around I guess.

But the real problem with this movie though is not how stupid it is. It’s how god damn long it is. IMDB and Moviefone both list it as 100 minutes, but they must be run by a secret society known as ‘the masons,’ because the movie is almost 2 1/2 hours long. The theater gave the running time as 2 hours and 26 minutes. I know there are ads and everything, but it started at 2:30 and I was out of there at 5 without watching most of the credits. I mean a 90 minute movie like this might be amusing, but 2 1/2 hours? Jesus Bruckheimer, you really want to put America through this?

Okay, maybe that’s a little over the top. But still. Our fragile democracy can’t take too much more of this crap.

*after I made that joke about a character being named Patrick Henry, I found out that Jon Voight’s character actually is named “Patrick Henry Gates.” I guess I missed it on account of its subtlety.

Diane Kruger Jon Turteltaub Nicolas Cage
This entry was posted on Friday, November 19th, 2004 at 4:19 pm and is filed under Action, Reviews, Thriller. You can follow any responses to this entry through the RSS 2.0 feed. You can skip to the end and leave a response. Pinging is currently not allowed.