Stoked: The Rise and Fall of Gator 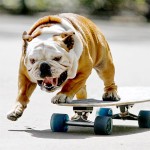 Did you ever see that skateboarding documentary DOGTOWN AND THE Z-BOYS? Well STOKED is like the depressing, fucked up David Fincher part 3 to that where all the main characters from part 2 (except the cat) get killed offscreen in the opening credits and Z-Boy shaves his head and gets infected and jumps into a pit of molten metal at the end and burns himself up. Except kind of worse. And metaphorical.

Actually alot of this picture is a fun time nostalgia type of deal about a period in the late 1980s or some time like that where young people grew their bangs real long and wore pink helmets and funny pants and went around on skateboards jumping up in the air. In DOGTOWN they were doing wheelies and shit on their skateboards but what they would do according to this one is go into an empty swimming pool or a woooden ramp and they go back and forth real fast. 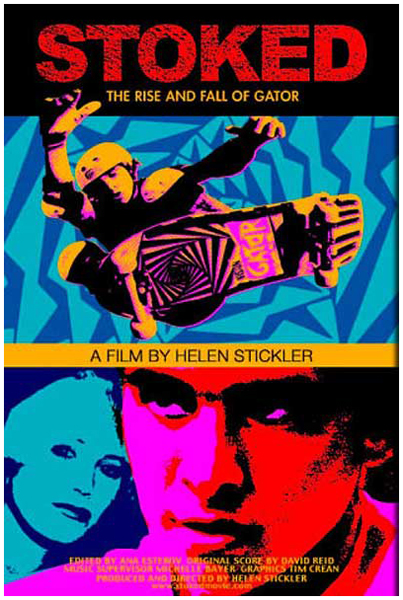 Now what they say is one of these guys who was doing this was a dude named Mark Ragowski but they called him “Gator” because of it was a nickname he had, I guess. At a very young age he became a professional skateboarding rider, sponsored by some skateboarding company I believe, or possibly rollerskating, I’m not sure. He became one of the most famous ones, little kids treated him like a rock star and they would go on a big tour and set their ramp up in a mall and then run around the hotel naked, punch a cop in the face, get drunk and fuck some young gals, etc.

Because Gator dressed really bad, some guy from the skateboarding company decided to design clothes for him, so they sold them and started making millions of dollars, etc. So he gets rich and him and his friend Tony Hawk from the video games they have mansions together.

Now the most interesting part of this picture is the universal story arc of the doomed celebrity. You basically got all the cliches of the biopic in here but luckily it’s a documentary so you can get away with it. He starts out with nothing, gets famous through his incredible talent and eccentric personality, falls deeply in love, but has a troubled off and on type relationship, starts to get possessive and a big ego, has major drug problem, alienates friends and family, changes his name, goes on MTV, accused of selling out, suddenly loses all fame and money, tries to straighten out his life, turns to jesus, suddenly goes fuckin nuts and rapes and kills somebody and goes to jail the end.

Like every moron who ever becomes famous at anything, he takes all this skateboarder bullshit WAY too seriously and suddenly thinks he is qualified to be in movies. It’s pretty funny when Gator is on Club MTV dancing and riding his skateboard. He really thought because he was famous and rolling around on a piece of wood that all the rock and rollers and movie stars would want to hang out with him. Everybody is fucking like this. Every rapper, R&B singer, wrestler, standup joke teller, chef or crocodile hunter becomes a fad for a month and suddenly they and corporate america lose track of reality and tries to reach for the gold. Even people who already are in movies get this same disease so they think they can start a rock band or be a painter or some stupid shit like that.

So those game show contestants from American Idol make a movie together. Mariah Carey makes Glitter. Vanilla Ice makes Cool As Ice. Those dancing guys from Saturday Night Live make a movie. That chef makes a sitcom. Jerry Springer makes a movie. The cast of Blair Witch Project goes on talk shows talking like they are real actors. Anybody who ever lived in a house or ate something foul on a reality show suddenly has an agent and tries to get acting gigs. Bruce Willis, Kevin Bacon, Eddie Murphy, Billy Bob Thornton and David Faustino all make albums. Why can’t people just stay cool. All this ambition leads to nothing but pain.

Just as Mr. Gator gets to this point in his career, there is suddenly a major change. Skateboarding kids invent the “street” style of skateboarding where they jump around on benches and curbs and bother you when you’re walking innocently down the sidewalk minding your own business. It turns out most kids don’t have a giant round empty swimming pool or specially constructed giant wooden ramp in their backyard. So they can relate to this low budget type skateboarding style more and it just explodes. Nobody fucking cares what Gator can do anymore and when he tries the street thing he’s as bad as you or I would be. End of career sorry Gator.

And that’s not even the depressing part. I wasn’t kidding about Gator turning into a rapist/murderer, and there is some unexpectedly nasty crime scene photos in there. Didn’t want to see that, actually.

So it’s a story of one guy who, for whatever reason, was not strong enough to survive the loss of fame without losing his sanity too. Somewhat in the tradition of the great wrestling documentaries, this is a very interesting documentary that makes even us non-wheeled individuals interested in the history and the tragic ending of a silly sport for guys in pink helmets. what’s the deal with that, guys?

This entry was posted on Monday, February 16th, 2004 at 7:23 am and is filed under Documentary, Reviews. You can follow any responses to this entry through the RSS 2.0 feed. You can skip to the end and leave a response. Pinging is currently not allowed.