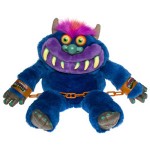 This one is from a series of movies made for cable called Creature Features. They have special effecting by Stan Winston (director of A GNOME NAMED GNORM) and are all based on the premises or titles of old movies produced by Samuel Z. Arkoff. They got SHE-MONSTER, DAN AYCKROYD VS. SPIDERMAN and many others. The one I’m waiting for is actually TEENAGE CAVEMAN directed by Larry Clark, the pervert who did KIDS and BULLY and ANOTHER DAY IN PARADISE where the main kid wears his pants so low you can see his fuckin pubes. Jesus, Larry! 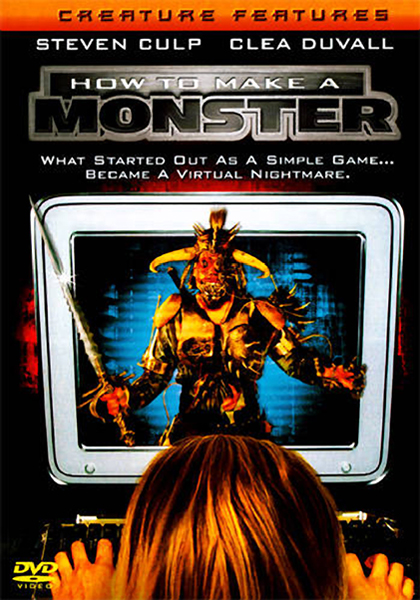 I read somewhere that TEENAGE CAVEMAN is basically a Larry Clark picture with a monster jumpin out at the end, and that sounds like just about the best thing you could possibly find on cable. You see this is all based on the Auteur Theory invented by the people of France, which states that if Larry Clark directed one movie, and you liked it, you might want to see his remake of TEENAGE CAVEMAN. But that one doesn’t have a release date yet, and I only have illegal basic cable, not illegal expanded cable. So using that same European principle, I found myself watching HOW TO MAKE A MONSTER as a TEENAGE CAVEMAN warmup. This one is directed by George Huang, and due to my keen eye and street smarts I remembered that this was the same dude who directed a pretty good independent picture called SWIMMING WITH SHARKS which I guess was pretty popular at the time and probaly plays on Bravo occasionally.

Anyway, I’m betting HOW TO MAKE A MONSTER has no connection to the original, even though I haven’t seen it. The reason I think this one is different is because it’s about fuckin video games. And nobody cared about that shit back then because a) it hadn’t been invented yet and b) people had better things to do, like runnin numbers, doing kitschy dances, taking naps, etc.

Before I go any further I should mention that this is an above average made for tv movie, meaning I was actually able to watch the whole thing, although it took three sittings. Most tv movies any reasonable person would have a hard time watching the whole thing unless they were in it, and that’s only if you were a principle because otherwise you’d turn it off after your scene, in my opinion. This one had enough of interest that I actually watched it and it even had some of the ol’ subtext which I felt was worth Writing about, since I am a Writer.

The story is about some company that’s tryin to make the scariest video game. The main characters are 1. some asshole who is I guess a video game designer agent 2.-4. three video game designers, each with their own colorful persona and technical specialty 5. an intern who bakes cookies (Clea Duvall from JOHN CARPENTER’S DISAPPOINTING GHOSTS OF MARS). Also Julie Strain has a cameo as a character named “Julie Strain”, who is an ugly chick with big tits who has a sword so nerds can jack off to pictures of her.

The video game industry is portrayed as very competitive, and this works both as George Huang’s Comment About Society and as a silly way to turn computer nerds into an ALIENS type horror picture situation. You see, there is a $1 million bonus to whichever member of the team manages to make the game scary, so they get very ruthless with each other. Also, there is a high tech security system to keep an eye on them and lock them in if necessary, because they are wary of turncoats and spies from other companies. So of course when their motion control suit comes to life and starts killing people and building itself out of their weapons and pieces of their corpses, they get locked in with the monster. You gotta make sacrifices to stop corporate espionage.

There are many phoney touches to this picture that make the world hard to buy into. I am no computer expert – I mean, you’ve all seen my web sight. But when movie computer experts start spittin out phoney jargon like “cybergoggles” and referring to fictional companies like “Compurom”, even I know it sounds fake. And why would the video game keep make references to being a game, like saying “The game is on!” I don’t know about anybody else but it makes me uncomfortable watching movies where some jackass obviously had no idea what he was talking about when he Wrote the dialogue. For example poor Clea Duvall has to keep talking about how she’s at this company because she has “a great idea for a dot-com.” You’re supposed to really think she’s got a golden fuckin goose in her head even though 1. almost all of those young fuckers who tried that shit and got rich are back riding the bus again with me 2. how many really original ideas for money making web sights could be left anyway and 3. even back before we knew all this, anybody who called it a “dot-com” instead of a web sight sounded like a fuckin jackass who gets vocabulary words from the “buzzwords” charts in Newsweek.

There was one thing worse than that, though, something that was less believable even than the idea of a video game suit coming to life and killing people. It was the part where one of the characters claimed to be “a big fan of HEAVY METAL 2000”. I don’t care HOW much of a nerd this guy is supposed to be, there’s NO FUCKIN WAY anybody is a big fan of HEAVY METAL 2000.

On the other hand there are touches that are so cartoonish that you don’t need to take them seriously. My favorite thing about this film was the performance of Tyler Mane (who played Tiger Man in X-MEN) as the maniac video game weapon designer who had his name legally changed to Hardcore. He is like 8-feet tall and likes to cut himself and suck the blood out, and he leaves a bunch of axes and crossbows and shit laying around his office. (I don’t want to give anything away – these MAY or MAY NOT be used by and against the monster later on. I’m not gonna say.)

Mr. Mane plays Hardcore as kind of a lovable giant who might strangle you but you still like him. He is surprisingly charismatic considering that in X-MEN all he did was growl and punch. I think he may have a great straight to video acting career ahead of him much like Roddy Piper, although who knows if he will be lucky enough to have his THEY LIVE. Fans of Badass Cinema, keep your eye on this individual.

Clea Duvall is also good as the quiet, cardigan wearing intern who serves as the video game industry outsider and therefore the moral compass. She doesn’t get top billing but you know before the movie even starts that she’s gonna turn into the Ripley character. It was nice this time around to have her transformation come not as much from fighting an evil robot made of computer toys and severed body parts as from being sick of being abused by men. Unfortunately the conclusion is kind of a bummer. It turns out that the movie is really about her awakening to the ugliness of the world, etc. etc. She realizes that greed and cruelty will always be here, and the only way to not be a victim is to join in on the humiliation and torture of others. She gets a new hair do and becomes a ruthless bitch video game mogul. Draw your own conclusions.

This is much like the POV of Mr. Huang’s first picture, SWIMMING WITH SHARKS. If you didn’t see it what it’s about is Frank Whaley is the assistant to a hollywood executive named Kevin Spacey. Frank wants to work his way up to become a screenwriter, so he gets a job bringing coffee. This guy he’s workin for is a real fuckin asshole though and treats him like shit, so he ties him to a chair and points a gun at him. Kevin Spacey was real good in the movie, he was such an asshole that he seemed threatening even tied to the chair. I wanted to slit his fuckin throat. Makes me mad just thinkin about him in that movie. Asshole!

But if I remember right it was the same deal, the young idealist stands up for what he believes but in the process becomes the monster he hated. But we’re not talkin about the ol’ stare into the abyss and the abyss stares right back at that ass thing. Because movies like this (and LA CONFIDENTIAL and a million others) present it like yeah, it turns out after all that this IS the best thing to do. Don’t be a pussy. Russell Crowe was right after all, police DO need to torture their prisoners, bend the rules, maybe stick a toilet plunger up a guy’s ass. In the name of justice! You’re so naive.

So Clea Duvall and George Huang think they’ve seen it all and learned their lesson and that we need to wake up to the real world. What they don’t see is that that’s NOT the real world. George Huang used to be a cog in the Hollywood machine until DESPERADO director Robert Rodriguez convinced him to quit and go make his own movies. So you can understand that if this guy was some kind of movie studio executive, of course he doesn’t see things clearly. But in the real world, you don’t want to die and have an obituary that says “She made alot of money from some stupid video game about a devil guy with a sword. It was called ‘Evilution’, get it? ‘Evil’, not ‘Evol’.” Or, “He was a millionaire because he greenlighted a hit movie… but it was BATMAN AND ROBIN.” Or, “He inherited his dad’s oil company and presidency.” Characters in movies always lust for this kind of power, and smirk at you and tell you that everybody knows it, that deep down inside that’s what they want.

But I mean, I don’t want to be that asshole. Do you? Sure, everybody wants money, but do you really want to kill your way to the top of some fuckin video game company? Maybe Huang was using the video game company as a metaphor for something bigger, but even then. Do you want to be some asshole unelected president responsible for the deaths of millions, but rich and admired in some american circles? Seriously, think about it. Would that be fun?

No, I think for most of us the real world is meeting interesting people, goin out for a few drinks, gettin laid, watchin BLADE II too many times, eating garlic fries, uh, listening to John Coltrane, and, you know, stuff like… I don’t know. etc. Being an asshole really isn’t the way to be happy. I hate to burst anybody’s bubble, but what this made for cable Samuel Z. Arkoff remake co-starring an ex-pro wrestler is telling you about life is WRONG!

Let’s see if Larry Clark can do better.

Clea DuVall George Huang Jason Marsden remakes Tyler Mane
This entry was posted on Wednesday, June 12th, 2002 at 5:10 pm and is filed under Horror, Reviews, Science Fiction and Space Shit, Thriller. You can follow any responses to this entry through the RSS 2.0 feed. You can skip to the end and leave a response. Pinging is currently not allowed.