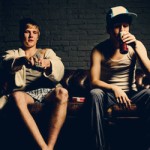 I couldn’t tell you how it happens. Every time I set out to see a particular movie. I mean there are three movies in particular I want to see right now. There’s Little Otik, the Czechoslovakian cartoon about some folks raising a tree stump as their baby. There’s Brotherhood of the Wolf, where the frenchy who directed Crying Freeman mixes French history with kung fu and, I guess werewolves maybe. Who knows. And there’s also Storytelling from the pervert who made Happiness.

I mean how could I have not known. Even when “Slacker” came out, what, ten years ago or something the word musta been already played out. So I’m heading to the theater and what do I see, some shitty teen movie actually called “slackers”. I mean in some ways this is better than your average movie that is below average. For example the casting is pretty good. The four main actors are all good. But still. Slackers! Jesus.

You know how in a movie like say OCEAN’S 11, you got some dudes that are supposed to be so cool and good at what they do that anybody would fantasize about being them? I mean they are dressed so slick, and they walk around in slow motion and look cool smoking, and they have an elaborate bank heist planned and they use little gadgets to do it. This is the same exact crap except for losers in college. So instead of a bank heist they have an elaborate scheme to cheat on a test, but they still use gadgets, and have a camaraderie and consider themselves a team. And they have their own college loser way of dressing cool, which is to have giant sideburns and wear a t-shirt and a dog collar over a button up shirt.

But the kid from RUSHMORE notices them cheating. He is a nerdy weirdo who is stalking a cute girl played by some famous model. He spies on her and likes to go home and wear her underwear on his head and talk to a doll he made out of samples of her hair he’s collected over time. He makes a deal with them that he won’t tattle on them if they use their extraordinary cheating powers to help him get together with the model chick.

The problem with a movie like this is that at this point, even people in movies should have seen enough movies to catch on not to try to pull this kind of crap. Because we all know, and Devon Sawa from FINAL DESTINATION should know, that as soon as he gets to know the girl as part of a scam he’s going to fall in love with her. I don’t care what movie you’re in, as soon as you lie to a girl you know you’re going to fall in love and eventually have to admit that you lied and get her mad at her and then have to pull some kind of crap to prove to her that you love her and make her forgive you and then there will be smiling and laughing and she’ll forget forever that you tricked her into liking her by spying on her and violating her trust, etc.

I mean you’ve seen this crap a million times. They even got the subplot about how the girl volunteers at a hospital and a homeless shelter, and they get the stalker kid to also volunteer there so he can know her.

Let me let you people in on a secret. No hot girl volunteers at a hospital. It doesn’t happen. I mean did you know ANYBODY in college who volunteered at a hospital? I didn’t go to college but I went to prison and I didn’t know anybody that volunteered there, unless you count making license plates and computer chips and, I guess, wearing lipstick and getting fucked in the ass. Anyway the point is the chances of some model you have a crush on volunteering at a hospital is gonna be pretty fucking slim. So you’re gonna have to try some other scheme, slick.

So where were we. Oh yeah, they throw in a couple of touches I haven’t seen before. There are three jokes about these dudes having sex with old ladies. There is even a pretty graphic scene where the Rushmore kid sponges Mamie Van Doren’s tits. And keep in mind she’s a little older than she was in, like, the ’50s. There are some little music-video style fantasy sequences that are sometimes amusing. The kid from Rushmore isn’t wasted. He gets to make up stupid little songs and talk to his hair doll and jack off and shit.

But otherwise it’s the same old crap. The finale is especially bad, with about seven layers of contrivances that make it almost as painful as that talk show at the end of MALLRATS. (Devon Sawa interupts the model girl’s test to win her back by admitting that he is a phoney; the T.A. allows him to make a big monologue in front of the whole lecture hall; the class not only doesn’t mind but applauds; the other characters come in to pull off a stunt that will wrap up various loose ends, etc. I mean I almost would’ve preferred the old “sing a song to her in public” routine. And that shows you I’ve seen too many of these fuckin movies.)

Devon Sawa Jason Schwartzman Jason Segel
This entry was posted on Friday, February 1st, 2002 at 6:50 am and is filed under Comedy/Laffs, Reviews, Romance. You can follow any responses to this entry through the RSS 2.0 feed. You can leave a response, or trackback from your own site.