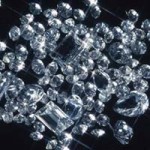 Remember for a little while there people thought Quentin Tarantino’s job was to find washed up actors who can’t get good roles anymore, put them in a great role and revive their career. He did it for Harvey Keitel and John Travolta anyway, and sort of for Bruce. He also helped bring attention to Steve Buscemi, outlaw award winner Samuel L. Jackson, Tim Roth, Michael Madsen and others. But somehow, when he gave both Pam Grier and Robert Forster in the best roles of their careers in the great JACKIE BROWN, the same magic didn’t work.

I mean these two were incredible in JACKIE BROWN. And what do they get? Oscar buzz that amounts to nothing, and some more really bad roles. Poor Pam Grier was in JAWBREAKER and SNOW DAY. Robert Forster kept doing straight to videos, with only an occasional bit part as a generic cop or doctor in things like MULHOLLAND DRIVE and the remake of PSYCHO PART 1. 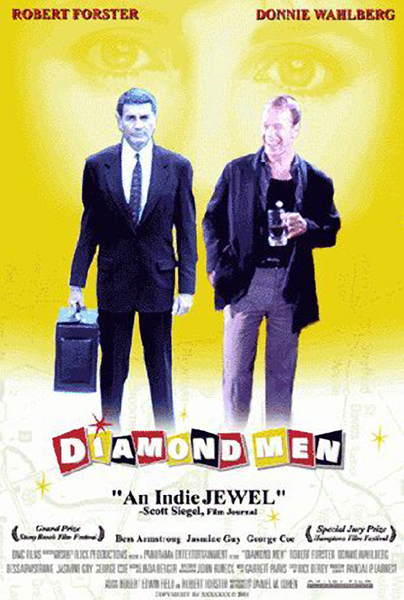 Well I’m happy to say that although DIAMOND MEN is no JACKIE BROWN by any stretch it is finally a worthy role for Mr. Forster. He plays an aging diamond salesman who, in the opening scene, keels over of a heart attack. Once he recovers he finds out that his company won’t let him “carry the line” anymore, which apparently means travelling around with a suitcase full of a million dollars in diamonds, showing them to store owners. He convinces his boss to give him one more chance training his replacement, played by Mark Wahlberg’s brother Donnie.

The cover art for this one is going to be very misleading. Here are a few things from the cover you will not see in this movie: handcuffs, cutoff jeans, a glittering diamond ring, hundred dollar bills, or especially hundred dollar bills spilling out of a briefcase handcuffed to a guy wearing a glittering diamond ring standing next to a guy wearing cutoff jeans. There is a gun but it plays a role smaller than Robert Forster did in MULLHOLLAND DRIVE.

For the most part this is not a crime movie. It reminded me more of SALESMAN. But it’s also not one of those movies obsessed with showing off its research. They have diamond salesman lingo and strategy in there but it flows smoothly. Mostly the movie is about the relationship between these two, and the widower Forster’s need for companionship. Donnie Wahlberg is a huge dork, and there is alot of humor from Forster’s facial expressions as the kid acts like an idiot. Watch Mr. Forster’s eyes as Donnie says things like, “Did you see the look on that old guy’s face?”

It’s a very down to earth movie, so the one or two movie type twists that happen do feel pretty out of place. But it’s easy to get over that because Mr. Forster’s performance is truly great. The guy just has so much charisma, and he’s so different from other movie stars. He seems like a real guy. Most of his performance is in his face, but his dialogue flows so naturally sometimes it’s hard to believe it’s scripted. It seems like his real reaction when Donnie asks him “Dude, you got any rubbers?”

This is only a pretty good movie but Mr. Forster makes it seem great. I would honestly consider this to be one of the best performances of 2002, right up there with Danny D. Lewis in GANGS OF NEW YORK and Jack Nicholson in ABOUT SCHMIDT.

Donnie Wahlberg heists Robert Forster
This entry was posted on Friday, November 30th, 2001 at 6:48 am and is filed under Drama, Reviews. You can follow any responses to this entry through the RSS 2.0 feed. You can skip to the end and leave a response. Pinging is currently not allowed.