Now I’ve read a thing or two about this one in the magazines and what not but I wouldn’t have to know it already to tell that this is one of those mega budget hollywood vehicles where they were still trying to Write it when they had already filmed it. And I know this is gonna be unpopular but buddy, you need a script for a picture like this. I know Mike Leigh, Wayne Wang, Christopher Guest etc. would disagree with me but improv is for pussies, in my opinion. 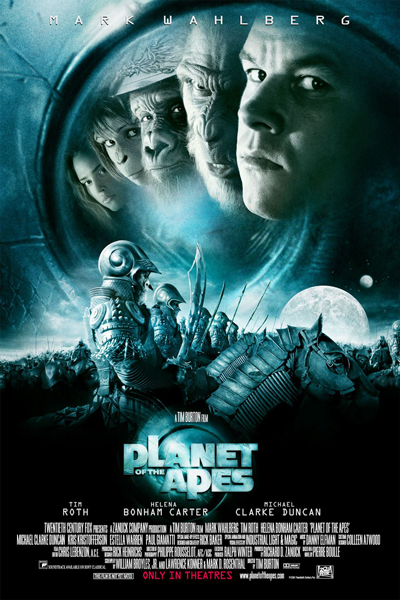 They got all of the elements of the original: apes and people. And nothing else. In this one, the people talk, and the apes have an even more primitive culture where they don’t even have guns. There is so little difference between the apes and people that the premise doesn’t even make sense anymore. Nobody knows why the apes look down on the humans so much or why the humans don’t fight back. Especially since in this one apes are afraid of water. You fuckin humans ever heard of a dam? Just flood the fuckers. Planet of the beavers coulda figured that one out why can’t planet of the humans?

Since the people can talk you lose the whole storyline of the one human who can talk, the ape scientists who befriend him, the prick of an orangutan doctor who thinks he is mimicking and the trial to prove he can think. Instead you got “We have to escape!” and “we have to find my ship!” and then “lets fight the apes!” There is not much to the ape culture or the human culture. Unless costumes count. There are helmets, etc.

One of the few areas in which this picture succeeds is in the makeup. Alot of these fuckers look like real apes, I must admit. The gorillas are especially realistic. You got Mr. Orange from Reservoir Dogs playing a sinister chimpanzee and his face is scary. He is alot more animalistic than the apes in the original, running around on his knuckles, hopping, sniffing people and what not. But that takes away from the whole theme of apes replacing humans. When the apes and humans are equally unsophisticated you have to wonder why it’s not called Planet of the Apes and Humans.

The worst part of the movie is the whole section that takes place in Ape City. It’s all crammed together on one cheesy set that looks like one of those stage shows at Universal Studios where they have some dude come out and swing a sword around, and then a wizard comes out and shoots fire out of his staff.

There are a few timid attempts to turn this into an animal rights allegory. Helena Bonham Carter, star of 1999 Outlaw Award winner for Best Fuckin Picture Fight Club, plays a half ape/half Janet Jackson creature who feels sorry for the humans, and sometimes lets them out of their cages. But this doesn’t really go anywhere. There are only two examples of real human cruelty and even those are over quickly. One of them involves branding the humans, the best one is giving a little girl to a little girl monkey as a pet. She keeps her in a cage and says “Good night little girl.”

Rumor is that the director wanted to have man and ape sexin each other up, but he wasn’t even allowed to do that. That’s when you quit, bud. No bestiality, no director, that’s what I woulda said.

It gets a little better when they go out into the Forbidden Zone and then run around and hit each other with sticks. That is what ape movies should be about, I guess, if they don’t have a story ready yet.

There’s also a scene I liked called The Necessary Cameo By the Star of the Original. Charlton Heston plays the bedridden father of Mr. Orange, so he has ape makeup on. And guess what happens:

By the way what the fuck is this about remaking Dolemite with LL Cool J as Dolemite and Rudy Ray Moore in a cameo role? Like Dolemite is this great premise that can be entertaining without starring Rudy Ray Moore. “We took this idea of the guy getting out of prison and going to save the neighborhood, but we updated it for the ’90s!” Shit, I’m all for anything that will buy Rudy Ray Moore a new coat but jesus, what in fuck’s name are they thinking. You put Rudy in the starring role and then we’re fuckin talking.

Anyway there are a couple twists in this apes picture but you always see them coming. One of them you figure out before they even land on the planet of the apes. But it still feels kind of satisfying when it happens, just because you’ve been waiting for it for so long.

Then of course there’s a twist ending that sets up the sequel. If you’ve read the original Pierre Boulle novel in the original French, then you have sort of an idea, except in French. Actually it’s not really the same ending, but a little better, and I definitely think Planet of the Apes Part 2 will be more what I’m looking for in an ape movie.

STOP READING IF YOU HAVEN’T SEEN THE MOVIE.

I mean it, asshole.

I would like to see the story of part 2 be about Mark Wahlberg on the run. The opening scene will have him beating up 8-25 cops. There will be alot of bloodshed, mayhem, etc.

Then he will go on the run and fight against the man. Maybe he will be a fugitive who travels from town to town helping gorillas who are in trouble. He could wear a dark cloak and a fake beard that makes him look more apelike. I wonder where the humans are in this new sequel society? With my luck they’ll be in prison.

It would also be cool if he travels back in time to assassinate President Lincoln. This movie will be a total anarchist movie destroying all american institutions. It’s okay though, ’cause they’re apes. That’s what you gotta tell the suits. Don’t let them get away with this toothless improv shit.

Mark Wahlberg remakes Tim Burton
This entry was posted on Friday, July 27th, 2001 at 11:42 am and is filed under Action, Reviews, Science Fiction and Space Shit, Thriller. You can follow any responses to this entry through the RSS 2.0 feed. You can skip to the end and leave a response. Pinging is currently not allowed.