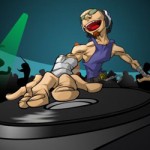 SCRATCH is a good one though, boys. The movie starts out with a basic background on the rapping music, breakdancing and etc. Then it moves into today’s “deejays” who are the folks who just… I don’t even know what these fellas are doing. But it’s two records and they just… whicka whick scratchety fresh, is basically the noise they make. Hard to explain. 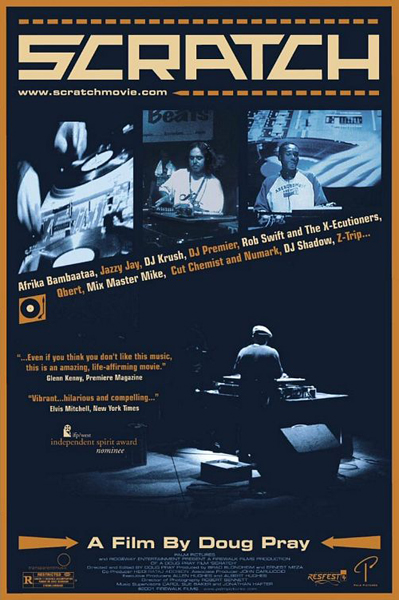 This movie played at Seattle’s best motion picture building, the Cinerama. And at the request of director Doug Pray, they played it loud. But I get the feeling that not the entire audience there was fans of the rapping music. But they still loved the movie.

To be frankly honest, I am an old white dude. And for most of the ’90s I was out of the picture doing intense research on what it’s like to be incarcerated for most of the ’90s. So like many of you ain’t it cool newsies, I am very much out of touch with american culture and music and am not familiar with the rap singers and scratchers that they have today.

HOWEVER, I have noticed that this is an important cultural type movement that should not be ignored. I first noticed the power of the rapping when I saw the great low budget prison/poetry drama SLAM. If you haven’t seen that one you ought to just for the scene where the poet who stars in the movie exchanges rhymes with a real life incarcerated gangster rap singer. The same director Mark Levin also did a good one called BROOKLYN BABYLON which takes real rappers and puts them in a romeo and juliet type forbidden love story. The story is conventional but it’s the same realistic slam style which in my opinion is as interesting as the dogme 95 movement that is going on right now in european film and in porn.

ANyway those are good movies about rapping but they are about the power of words. This one goes in the opposite direction to the music underneath the words. Even with so little background in the rapping movies I was able to enjoy SCRATCH which argues for why it is an art and an amazing skill to take pieces of different records and glue them together into new works. You see a guy named Mixmaster Mike turn an old blues record into some kind of funky scratch music. You see the Dj Shadow go into the basement of an old guy’s record store where there are thousands of records stacked completely unorganized. He says there is a religious aspect to it, if he finds something good in those stacks it was meant to happen.

Hey man if anybody could hook me up with a review copy of the die hard dvd box set I would be grateful thanks.

The best character is dj Q-Bert who is treated almost like a super hero. You hear all about how he hung out with Mixmaster Mike as a kid and copied all of his scratches, but improved them. Then when Mike moved away he didn’t have anyone to copy, so he tried to imagine what alien djs would be doing, and then copied that.

Before they ever show Q-Bert you see his friend “yoga frog” talking about him and holding a cardboard standup of him. Then when you finally see him he is in his house scratching but you only see him from the back, like a mysterious James Bond villain or something. What I’m saying is there is some good dramatical filmatism here, like when the guy Rob Swift is first introduced we see a close up of his hands on a steering wheel, and of course later we will see them on “the wheels of steel.”

During the question and answer session Doug Pray explained that he was more of a rock ‘n roll type dude but after they played him the tapes he realized this was a good documentary to make. He thought it helped to be an outsider and have to ask the dumb questions, like what the FUCK are you doing there with that record, buddy, I don’t get it. And when he was editing he started thinking about how he was looking for the best little bits of what people said and putting them in a good order and then he thought, oh jesus, I’m a DJ! Some of the filmatics are designed to imitate the works of the djs – he even had q-bert scratch with the interviews a couple times.

By the way Q-Bert made a movie called Wavetwisters which is PRETTY fuckin tripped out, in my opinion. It is only about 45 minutes long and it is a cartoon about this outer space dentist fighting against djs and these two babies in mexican wrestling masks with worms that come out of their bellies. Also it is a musical.

Anyway Doug Pray directed a movie called HYPE which was about the seattle “grunge rock” that they apparently had in the ’90s. Nobody really gives a rat’s asshole about that but he also edited AMERICAN PIMP for the hughes brothers and when he mentioned that he got some well deserved applause.

More than anything SCRATCH conveys the joy and magic of this underground outlaw movement which rejected the rock-star rapper mentality that was going on at the time in favor of reinventing music. They try to explain what they’re doing but still you’ll be thinking, WHAT the FUCK is this guy DOING to make that noise!? So you will come to really like these young dudes through their interviews but also enjoy watching them perform on stage and at home.

Another thing this movie gets across is how much these guys are all alike inside. You got the “INvisible Scratching PIckles” in California, a bunch of young phillipino and asian guys jamming out of q-bert’s beautiful house. and then you got the X-ecutioners, a bunch of black guys huddling into a little house in new york. Their styles seem very different but you know what? They both have toy robots next to their record players. So that probaly means something, in my opinion, I think.

This movie will be coming out in september, apparently they will be doing a tour with the djs performing after the movie. there will also be a soundtrack where they remix the song “Rockit” by herbie hancock that is a recurring theme in the movie.

By the way I’m sorry you boys who read my Ed Gein review don’t like my Writing style and thought it was “the most awfully written” review ever. I am just an individual trying to live a clean life and stay out of trouble is all. Maybe I will e-mail you all of my new works so you could critique it. thanks. But don’t let my vernacular prevent you from seeing this excellent music documentary thank you your friend vern.

Doug Pray music documentaries
This entry was posted on Saturday, June 16th, 2001 at 9:42 am and is filed under AICN, Documentary, Music, Reviews, SIFF. You can follow any responses to this entry through the RSS 2.0 feed. You can skip to the end and leave a response. Pinging is currently not allowed.