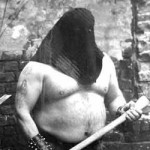 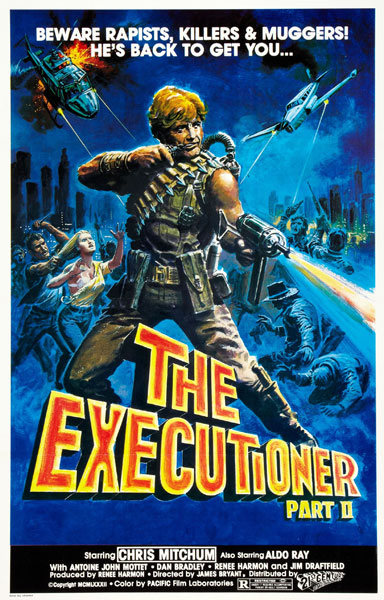 Turns out there was a good excuse for part 1 not being there: it doesn’t exist. This “part 2” really is designed to trick people into thinking it’s a sequel to the movie it’s a rehash of, THE EXTERMINATOR. It starts in Vietnam, it goes to New York, a Vietnam vet has traumatic flashbacks that cause him to go around murdering criminals (in this one his buddy doesn’t get killed), and there’s also the cop who tries to catch him but sort of understands him (Chris Mitchum from RICCO THE MEAN MACHINE and from Robert Mitchum’s loins).

But while THE EXTERMINATOR was kind of a cheap ripoff of DEATH WISH and ROLLING THUNDER, this is another step down in quality. It makes the actual EXTERMINATOR 2 look like THE GODFATHER PART II. The storytelling is awkward and sometimes hard to follow, the voices are dubbed, and they explain all the moronic themes of the movie by having a radio announcer just say them as narration. While alot of the shittiness is funny there’s also a rape scene and some long scenes of a dude roughing up a young prostitute. Generally that type of business is a comedy killer.

The funniest part is the Executioner’s favorite method of execution, which is to stick a grenade down somebody’s pants. The first time we see this method is a little different actually, he finds some guys raping a girl on a rooftop, so he puts the girl’s panties over a guy’s head and sticks the grenade into the panties. Then it cuts to scratched up stock footage of an explosion. And of course it’s the same explosion every time he does this trick.

The director is James Bryan who also did DON’T GO IN THE WOODS… ALONE! That one’s dubbed too. I tried to watch it around Halloween time but I had to turn it off after about ten minutes. So I was not able to get far enough into it to find out why they hell they need that dramatic pause in the title, or even the word “ALONE.” Why isn’t DON’T GO IN THE WOODS enough? I’ll never know, ’cause I ain’t watchin that shit. Bryan also did LADY STREETFIGHTER, which may or may not be designed for you to confuse it for SISTER STREET FIGHTER. And he did one called BOOGIEVISION.

This fake sequel business is interesting – I wonder how many more of those there are? The only one I can think of is Lucio Fulci’s ZOMBIE, which was released as ZOMBI 2 in Italy, to make people think it was a sequel to ZOMBI, which is what they call DAWN OF THE DEAD. I guess I’ve been on a vigilante kick lately because I also saw THE BRAVE ONE with Jodie Foster. Maybe somebody should make a rehash called THE BRAVE 1 PART II. Or how about some fake Jason Bourne sequels? THE BORN ULTIMACY, THE BORN ABSOLUTION, THE BORN SHENANIGANS. And of course THE BORN NOEL, where he has to remember the true meaning of Christmas. And THE BORN ACQUAINTANCE for New Year’s.

Aldo Ray Christopher Mitchum James Ryan vigilantes
This entry was posted on Monday, January 1st, 2001 at 11:09 am and is filed under Action, Crime, Drama, Reviews. You can follow any responses to this entry through the RSS 2.0 feed. You can skip to the end and leave a response. Pinging is currently not allowed.