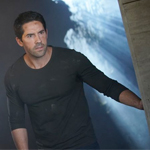 I don’t think I can say ABDUCTION is Adkins’ weirdest, because there’s always UNIVERSAL SOLDIER: DAY OF RECKONING, a far more atmospheric, moody and hard-hitting movie, better on every level. This one is literally a Roger Corman production and has the bland glossiness and chintzy digital effects I associate with the SyFy Channel. But it’s definitely not generic. It has a hell of an opening that immediately dunks your head in the craziness and takes its time before letting you take a breath. I was into it. END_OF_DOCUMENT_TOKEN_TO_BE_REPLACED