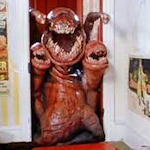 I haven’t seen Joe Dante’s PIRANHA in many, many years, but here I am reviewing the remake. No, not Alexandre Aja’s Dimension Films version PIRANHA 3D (which I did review when it came out in 2010), but the 1995 Corman production directed by Scott P. Levy (MIDNIGHT TEASE, THE ALIEN WITHIN).

This thing was made for Showtime, and I never got Showtime, but the reason I remembered it existed was because I knew Punky Brewster herself, Soleil Moon Frye (KID 90) was in it. That was enough to lure me in. (Get it?) I guess she was in a couple horror movies (INVITATION TO HELL, PUMPKINHEAD II) but I’m actually kinda surprised they didn’t resurrect her in the post-SCREAM era! Maybe they tried but she was happy just doing cartoon voices.

I have to admit I didn’t remember the original enough to realize until reading the Wikipedia summary that this remake barely alters its script. Alex Simon (BLOODFIST VIII: TRAINED TO KILL) is credited as the writer, but it’s so close original writers Richard Robinson and John Sayles get both “based on the screenplay by” and “story by” credits. END_OF_DOCUMENT_TOKEN_TO_BE_REPLACED 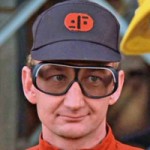 You guys have been covering this ‘2001 MANIACS’ movie for what seems like years. Well, it seems that way because it is that way. Quint reviewed the script before Bush was even in the White House. Then you kept talking about it while it was being made and a while back I believe Moriarty personally presented a screening of it and you guys posted a bunch of reviews from the screening. That’s already more than enough coverage for a movie like this. But now that it’s found its rightful home in Direct to Video Land, it falls into my jurisdiction. I make the rules here. King Kong ain’t got shit on me, etc. etc. Anyway here’s my take in case anybody gives a shit. (Not likely.) END_OF_DOCUMENT_TOKEN_TO_BE_REPLACED