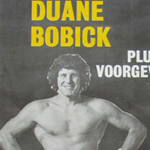 Duane Bobick stars as amateur boxer Billy Boy Lamont. His father (Willie van Rensburg, also the screenwriter) is a former fighter who is suddenly paralyzed, and Billy Boy can’t find any work to pay for his treatments, so he says he has to fight. Of course his mom (Trix Pienaar, THE COLOR OF FREEDOM) is against it (like Phylicia Rashad in CREED) and also he somehow knows that he’ll get a bunch of money for it. END_OF_DOCUMENT_TOKEN_TO_BE_REPLACED