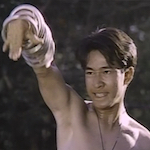 He left the business in the early 2000s, but the success of CRAZY RICH ASIANS inspired him to try again, and right away he got to play Michelle Yeoh’s husband! Good for him. His return inspired me to finally check out a movie I’d been curious about for years, BREATHING FIRE (1991), because it’s his only previous English language martial arts movie, and very much the kind of chintzy low budget b-movie I enjoy. Atrocious dialogue and acting, convoluted-to-nonsensical story, but lots of laughs, training montages and pretty cool Hong Kong style fights. A fun time. To give you an idea, the DVD I rented was a double feature with a dubbed Bruce Li vehicle called EDGE OF FURY, and the cover pretends like Bolo Yeung (who plays one of the bad guys and is credited as “Bolo Young”) is the star. END_OF_DOCUMENT_TOKEN_TO_BE_REPLACED