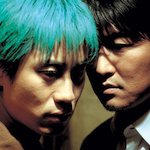 In case you, like me, managed to hear 18 years worth of praise for MR. VENGEANCE without actually finding out what it was about, here goes. It’s the story of Ryu (Shin Ha-kyun, THE VILLAINESS), a deaf and mute young man who dropped out of art school to work at a factory because his sister (Im Ji-eun) needs a kidney transplant. He’s not a match, but he’s saving up his money in case they find a suitable donor. He’s able to narrate the story through letters he sends to a DJ to read on the air, and he’ll sit with his sister as she listens to the broadcasts. END_OF_DOCUMENT_TOKEN_TO_BE_REPLACED 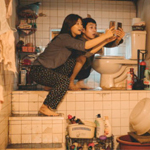 It’s the story of the Kim family – father Ki-taek (Song Kang-ho, THE GOOD, THE BAD, THE WEIRD), mother Chung-sook (Jang Hye-jin), son Ki-woo (Choi Woo-shik, TRAIN TO BUSAN) and daughter Ki-jeong (Park So-dam, THE SILENCED) – who seem to take economic struggle in stride. They live together in a cluttered basement infested by stink bugs, with a window facing an alley where they often see a drunk guy peeing. In the opening scene they discover that their neighbor added a password to her wi-fi, but they can connect to a nearby cafe if they crawl into the top corner of the apartment on the raised platform with the toilet. Which is important because they need WhatsApp to communicate with the young manager of Pizza Generation (Jung Yi-seo) who pays them to fold boxes. END_OF_DOCUMENT_TOKEN_TO_BE_REPLACED 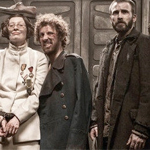 It has similar themes of class inequality to ELYSIUM and the HUNGER GAMESes, but I liked it quite a bit more than those. The concept is that the poor people live in squalor at the back and the rich people in luxury at the front. It’s a brutal dictatorship; the tail dwellers get threatened and beaten, limbs severed as punishment for defiance, fed nothing but green jelly protein bars. Every once in a while a lady in a pretty yellow dress comes back with a tape measure to size up which of their children to steal. You can just feel the anger and humiliation of the people when this shit happens. It’s easy to hate those motherfuckers. END_OF_DOCUMENT_TOKEN_TO_BE_REPLACED