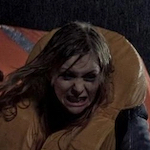 I was aware of this 2009 movie REYKJAVIK WHALE WATCHING MASSACRE (retitled HARPOON: WHALE WATCHING MASSACRE for us ignorant Americans) because it’s an Icelandic movie that has that title and then Leatherface himself, Gunnar Hansen is in it. Sounded like a spoof, I thought, but it’s not. It certainly has humor in it, but so does that other movie Hansen is most famous for. This is a solid, legit horror movie, with an extra layer of meaning if you’re a TEXAS CHAIN SAW MASSACRE obsessive like me.

I finally watched it for a different reason: the screenplay is by the Icelandic writer Sjón, a.k.a. Sjón Sigurdsson. He grew up with Björk and wrote some songs with her (including the Oscar-nominated “I’ve Seen it All” from DANCER IN THE DARK), and sometimes performed with the Sugarcubes under the name Johnny Triumph. But also he’s a poet, novelist and screenwriter, and after decades of all that he finally caught my attention this year by co-writing THE NORTHMAN with Robert Eggers. That’s still my #2 movie of 2022 so I figured shit, I oughta watch his horror movie. END_OF_DOCUMENT_TOKEN_TO_BE_REPLACED