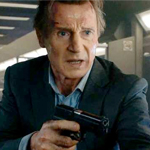 The Commuter is Michael McCauley, an ex-cop who is suddenly fired from his current job at an insurance company, and then finds himself under siege in dark territory on the ride home. It’s the train he’s been riding for ten years, and most of the passengers know him by name, make small talk with him and ask about his wife (Elizabeth McGovern, ONCE UPON A TIME IN AMERICA, CLASH OF THE TITANS) and kid (Dean-Charles Chapman, Game of Thrones). The usual sameness of his mornings is cleverly illustrated in an opening scene that shows him getting up, having breakfast, talking to the family and getting dropped off at the train, jaggedly cutting between seasons, emotions and conversations to show the passage of time without interrupting the flow of the daily routine. END_OF_DOCUMENT_TOKEN_TO_BE_REPLACED