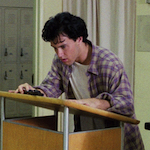 It was actually his USC thesis film, but he managed to sell it for release on VHS under the title CLASS OF FEAR. They promoted it like an exploitation movie, but it’s more of a corny drama, almost an After School Special. It does not show many signs of directorial vision that I could pick up on, but maybe Murphy deserves credit for recognizing that and going into producing instead. I’m not gonna hold it against him. END_OF_DOCUMENT_TOKEN_TO_BE_REPLACED