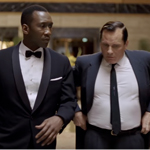 It was only after I saw the movie and tried to read up on it that I found out some relatives of Dr. Don Shirley, the classical pianist who Ali plays, strongly object to the movie. I’ve been struggling with this review since before the movie won the Best Comedy or Musical Golden Globe, which is when the good pitchforks were taken out of the china cabinet and sharpened. Now it’s also nominated for the best picture Oscar, taking up that bad guy slot as the movie that all cynical people assume will win and show how out of touch Hollywood is about race. END_OF_DOCUMENT_TOKEN_TO_BE_REPLACED