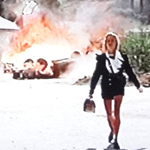 Oh yeah, and “introducing Tonya Harding as Gina.” TONYA & NANCY: THE INSIDE STORY mentioned that the infamous Olympian wanted to start acting, maybe on a soap opera or something. This is what became of that aspiration. (Her only other acting credit is a 2003 film called THE PRIZE FIGHTER.) Here she plays a restaurant manager who the main character’s bombmaker boyfriend is cheating with. END_OF_DOCUMENT_TOKEN_TO_BE_REPLACED