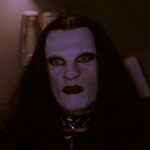 Since this was released in 2001 it sort of goes without saying that it’s one of those “live internet broadcast” movies, a format that is almost always terrible, but generally provides at least a few chuckles. I get a kick out of how they always have a big board that tells them how many people are watching and somehow it has an immediate, instantaneous relation to what’s happening live. Like, if something exciting happens (usually somebody getting killed), suddenly more viewers are watching. (Yes, they have a reader board on the plane to update them on how many.) END_OF_DOCUMENT_TOKEN_TO_BE_REPLACED 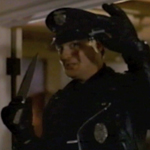 Instead of an action-horror hybrid this is a generic shitty slasher with its closest thing to a redeeming value being the cop-themed killer, Officer Joe Vickers (played by Bobby Ray Shafer, now best known as Bob Vance of Vance Refrigeration on The Office). He’s an officer who suddenly goes on a killing spree. Also he’s satanic. In the opening he puts on his uniform in a dingy apartment with a pentagram painted on the wall and candles everywhere. He dips his hands in a bowl of blood before putting on his sunglasses. Later he sets up a bunch of wooden crosses in the woods for a ritual. END_OF_DOCUMENT_TOKEN_TO_BE_REPLACED