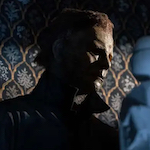 The cold open takes place in Haddonfield on Halloween, 2019. A young man named Corey (Rohan Campbell, SANTA BABY 2: CHRISTMAS MAYBE) is called last minute to babysit for some rich couple. The kid (Jaxon Goldenberg) is a smartass. They watch John Carpenter’s THE THING together – an obvious but too-perfect-to-pass-up nod to watching THE THING FROM ANOTHER WORLD in Carpenter’s HALLOWEEN. Fears of Michael Myers are discussed. The kid points out that Michael kills babysitters, not kids. But Corey goes to the kitchen, hears a thump, comes back and can’t find the kid. The mansion is huge. A door is open. A knife is missing. The kid is screaming upstairs. END_OF_DOCUMENT_TOKEN_TO_BE_REPLACED