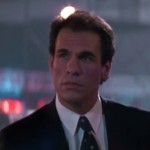 Okay, first of all, there’s no foolin here. You and I both know there was no way in hell I was gonna like David Zucker’s right wing satire about how liberals hate America and Michael Moore stuffs his face with food all the time. So this is not a review, this is more like a report for other people who, like me, were curious as hell what this movie was like, but unlike me could not stomach sitting down and watching the whole thing.

Chris Farley’s brother plays Michael Moore (they call him Michael Malone), the famous documentarian (his movie is called DIE YOU AMERICAN PIGS), who is hired by 3 Arab terrorists (Robert Davi, two others) to direct a movie, but also to help them get into a Trace Adkins concert so they can blow themselves up, or something like that. But also Michael Moore is planning an anti-4th of July protest, so the ghost of Patton brings him around Dickens-style to show him how the world would be different if America didn’t believe in war, for example Gary Coleman would be his slave and Detroit would be nuked. Obviously. END_OF_DOCUMENT_TOKEN_TO_BE_REPLACED 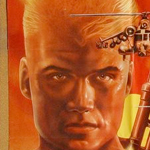 Anyway, the particular article I read referred to Abramoff as a “former b-movie producer.” Holy shit! I thought. I guess I hadn’t been following this closely enough because I hadn’t heard that before. The trusty ol’ internet movie database explained that Abramoff had produced and wrote the story for the Dolph Lundgren picture RED SCORPION, not to be confused with RED SONJA, RED DAWN, RED SUN, RED EYE, THE RED VIOLIN, THE RED BALLOON, or Krysztof Kieslowski’s THREE COLORS: RED. He’s also credited as executive producer on RED SCORPION 2. That’s it although his brother Robert went on to produce a bunch of other movies I never heard of. END_OF_DOCUMENT_TOKEN_TO_BE_REPLACED