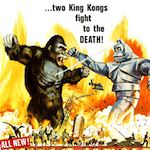 Like the original GOJIRA, plus KING KONG VS. GODZILLA and many other kaiju classics, KING KONG ESCAPES is directed by Ishiro Honda, with music by Akira Ifukube and effects by Eiji Tsuburaya. But it has a little different vibe, seemingly influenced by spy movies. Tsuburaya’s great model work is used to create lots of cool helicopters, hovercrafts, a submarine, and a structure to house a giant robot. There’s a colorful villain named Dr. Who (Hideyo Amamoto, YOJIMBO, THE SWORD OF DOOM) who wears a cape with a Dracula/Dr. Strange collar and he has a base at the North Pole and an army of employees in nehru suits, white Mickey Mouse gloves and construction helmets. In the American dub he’s voiced by Paul Frees, so you keep expecting him to ask “is this room actually stretching?” END_OF_DOCUMENT_TOKEN_TO_BE_REPLACED