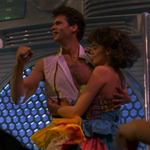 BODY ROCK – the one from New World Pictures – is the one I never knew about back then. It’s also by far the dumbest one. Therefore I have no choice but to recommend it. It stars Lorenzo Lamas (in the midst of Falcon Crest, five years before SNAKE EATER) as Chilly D, a… graffiti artist? He keeps saying he is, but we only see him helping with one subway car during the opening credits. He’s the founder and namer of the Body Rock Crew, his friends who breakdance, and he seems to be some kind of club promoter who introduces them when they dance at a place called Rhythm Nation. Then he stands on the side awkwardly doing a few moves. END_OF_DOCUMENT_TOKEN_TO_BE_REPLACED