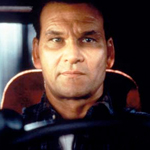 Patrick Swayze (STEEL DAWN) plays Jack Crews, a nice and upright Swayzian family man working hard at a warehouse to support his beloved wife Melanie (Brenda Strong, STARSHIP TROOPERS 1-2) and daughter Tracy (Erin Broderick, RETURN TO SLEEPAWAY CAMP). He sees his responsibility to provide for his family as his highest calling, and makes time to cook “only the absolute best homemade” for dinner and to go to Tracy’s basketball game. But if somebody at work tells him to stay late for some bullshit when he’s supposed to pick the girl up from school he’ll say “If you need it, it’ll be done.” END_OF_DOCUMENT_TOKEN_TO_BE_REPLACED