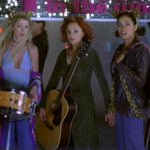 Actually maybe we should forget about comics and consider this timeline: it was a year before American Idol started. The Spice Girls had packed it up the year before. NSYNC and Backstreet Boys were still popular. The movie seems to offer the Pussycats as a refreshing alternative for teenage girls to obsess over instead of boy bands, but it should be noted that Destiny’s Child, Alicia Keys, Jennifer Lopez, Janet Jackson, Brandy, Madonna, Mary J. Blige, Pink, and Aaliyah (plus Britney Spears and Jessica Simpson) all had hits that year. But I guess the Pussycats do stand out by playing instruments. Their songs are kind of sassy pop punk, not good in my opinion but not as intolerable as some in-movie music. END_OF_DOCUMENT_TOKEN_TO_BE_REPLACED While THE LEGO® MOVIE is the most brazen product placement movie to be accepted by society, it is not the first one to be made. The innovator in this field is 2012’s computer animated feature FOODFIGHT!, the directorial debut of TRUE LIES and MORTAL KOMBAT executive producer Lawrence Kasanoff, who’d already helped pave the way for the hit  movie with a number of Lego®-based animated TV shows. END_OF_DOCUMENT_TOKEN_TO_BE_REPLACED