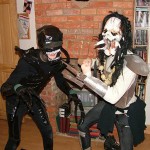 Aliens, predators, why do you always gotta fight? Why can’t you just resolve your differences? I know they say “whoever wins, we lose” but I’ve seen both the AvP movies and clearly nobody is winning anything. We lose, and you lose our respect.

RESURRECTION and RATATOUILLE were already taken and they needed something that started with an R, so the title of this thing is REQUIEM. That might make you wanna ask who died, but you already know the answer: the remaining dignity of aliens and predators across the universe. Two proud races slandered and humiliated, on the Lord’s birthday no less. And why? For what? What the hell did aliens and predators ever do to us other than entertain and delight us, scare us, fuck up our space colonies and skin some dudes in a jungle? Nothing. And for that we give them a franchise so lazy it can’t even be bothered to spell out its own titles. END_OF_DOCUMENT_TOKEN_TO_BE_REPLACED 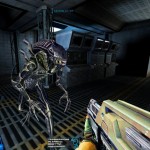 But the title ALIEN VS. PREDATOR is misleading. It is actually MODERN DAY HUMANS + SOME CGI ALIENS AND TEENAGE PREDATORS. It turns out that the ancient Predators built a pyramid in what is now Antarctica and it’s still there under the ice. Once every 100 years exactly, a Predator ship comes down, sets loose some Alien eggs and has their Predator boys fight the Aliens as a rite of passage. Maybe they are from the south of Predator planet and this is their equivalent of deer hunting. Or Texas football. END_OF_DOCUMENT_TOKEN_TO_BE_REPLACED 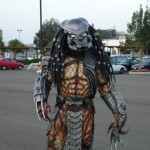 But damn if the opening isn’t a scorcher. It starts out with the familiar Predator POV heat vision in the jungle… but as it pans across you realize it’s not the jungle – it’s the outskirts of Los Angeles. THE URBAN JUNGLE! In the futuristic year of 1997. (Think about it: a Predator is loose in Los Angeles at the same time Snake Plissken is looking for the president in New York. Meanwhile, the Spice Girls are topping the charts and TITANIC is breaking box office records.) END_OF_DOCUMENT_TOKEN_TO_BE_REPLACED

Like E.T. THE EXTRA-TERRESTRIAL, PREDATOR doesn’t give us any backstory on the alien star. All we know is the guy is no botanist. Maybe an exotic meat salesman. It almost seems like an alien remake of FIRST BLOOD because you got this one crazy alien maniac out in the jungle by himself, taking on a couple platoons worth of elite soldiers and doing a pretty good job of it. John Rambo did some sick shit but he didn’t skin a bunch of guys and hang them upside down from the trees. He didn’t pull out people’s spines. So Predator’s got one on John. You even get the scene where Predator, like John, is wounded and has to do some makeshift surgery on himself. The only difference is he uses advanced alien technology to heal himself instead of just crudely sewing himself up. END_OF_DOCUMENT_TOKEN_TO_BE_REPLACED