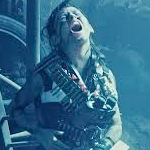 Still, I’m so excited to tell you guys about this one. Though it was made a year before HOME ALONE, it combines the kid-defending-his-house-at-Christmas concept with SILENT NIGHT, DEADLY NIGHT killer Santa horror and tinges of Jean-Pierre Jeunet heightened reality. It’s so joyous in putting its young hero and his Danny-Cooksey-worthy spikey mullet through kid versions of ’80s action tropes that if I didn’t know it was from ’89 I’d assume it was a tribute movie made by some French answer to Taika Waititi. And yet it’s not at all a comedy. It absolutely works on the level of a serious stalk and slash movie, and it’s about serious ideas. END_OF_DOCUMENT_TOKEN_TO_BE_REPLACED