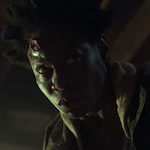 That’s also when veteran detective Godfrey (Peter MacNeill, CATHY’S CURSE, Droids, A HISTORY OF VIOLENCE) first spots her. He sees her leave with a bullet wound in her head and then sees her the next day, completely healed. And he’s after the same guy so when he meets her even though he realizes she’s a cannibal he decides to set her up with his unused flophouse (with refrigerator for storing fingers and ears and stuff) and give her the DEATH WISH 3 style unofficial sanction. END_OF_DOCUMENT_TOKEN_TO_BE_REPLACED