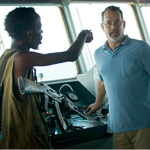 Tom Hanks (HE KNOWS YOU’RE ALONE) plays the titlional captain, portrayed as an ordinary sorta schlubby working man married to Catherine Keener (in a part only slightly bigger than she had as the dead body in BAD GRANDPA). There’s a sense of inevitable doom as he takes his boat around the horn of Africa. We’re not the only ones who know he’s gonna get hijacked. He spends the first part of the movie suffering from an acute case of That Sinking Feeling until sure enough a suspiciously close skiff shows up on the radar. END_OF_DOCUMENT_TOKEN_TO_BE_REPLACED