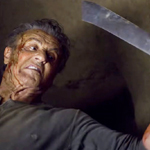 It doesn’t seem like it, but that movie was 11 years ago. Rambo has short hair now, wears cowboy hats and runs his (now deceased) dad’s horse ranch. He lives with a woman named Maria (Adriana Barraza, AMORES PERROS, DRAG ME TO HELL), who I guess the photos on the wall indicate was his parents’ maid, and her granddaughter Gabrielle (Yvette Monreal from the El Rey show Matador), who calls him Uncle John and who he says he thinks of as his daughter. END_OF_DOCUMENT_TOKEN_TO_BE_REPLACED