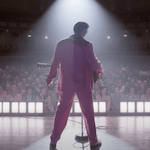 ELVIS is absolutely presented as a legend, one told by Presley’s long time manager, Colonel Tom Parker (Tom Hanks, DRAGNET), who admits “there are some who’d make me out to be the villain of this here story,” and in between his justifications does come off as something of an evil mastermind. He addresses us decades after Elvis has passed, when he’s on his own death bed in a Las Vegas hospital room with a view of Star Trek: The Experience (1998-2008), but in his mind he’s also dragging his I.V. drip around an empty casino. END_OF_DOCUMENT_TOKEN_TO_BE_REPLACED