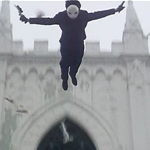 Researching my review for CRYING FREEMAN I found out there was this five-years-older adaptation of the same comic. This one’s actually a Hong Kong action movie for real, but it’s not the moody John Woo type that influenced the 1995 version. This is the frenetic wire-fu style that was also big at that time.
END_OF_DOCUMENT_TOKEN_TO_BE_REPLACED

The sequel directly follows part 1. Chan’s character Chan Ka-Kui, in the great tradition of movie hero cops, is demoted to traffic patrol for being so awesome and busting the drug lord. His boss and uncle return, and although they develop a stronger friendship over the movie it starts out with him being chewed out for all the property damage his famous part 1 stunts caused, including driving over the shantytown and sliding down the weird Christmas tree looking thing in the shopping mall: “Why didn’t you use the stairs? Did you have to destroy the chandelier?” END_OF_DOCUMENT_TOKEN_TO_BE_REPLACED

POLICE STORY, directed by and starring circa-1985 Jackie Chan, starts out seeming more serious than most of his movies. Jackie and a bunch of other cops have to raid a huge shantytown looking for drug dealers, and it leads to a chaotic shootout through narrow paths and rickety structures. One of the cops is so scared he actually pisses his pants, and it’s played for humiliation, not for laughs. These guys know that alot of people are about to be killed, including some of them.
END_OF_DOCUMENT_TOKEN_TO_BE_REPLACED 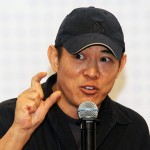 This movie has been making the rounds for years. It got nominated for the foreign film oscar, and it played the seattle international film festival, and it’s been on DVD in Asia forever which is no problem for a worldly dude like me, I’ve been free of the region code shackles for years. Region 2, region 3, bring it on motherfuckers, I go all the way up to region 4, region 5 on a good day. I could do region 10 if they threw it at me, region 11, I don’t give a fuck. Anything. But here in region 1 Miramax was supposed to release HERO in theaters. What they wanted to do was leave it on the shelf for years and finally put it out when there’s less interest. That worked so well with SHAOLIN SOCCER. Unfortunately HERO was sitting on the shelf but then it fell off the shelf and got stuck behind the desk and nobody knew it was there. Then I think Tarantino dropped a pencil back there or something, so he reached back there and he felt HERO. So he pulled it out and dusted it off and he was like, “You guys still have this? You should, like, release it in theaters, where people go to watch movies projected on a screen.” END_OF_DOCUMENT_TOKEN_TO_BE_REPLACED