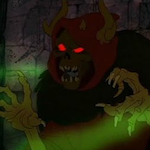 Its hero is Taran (Grant Bardsley, George Cukor’s THE BLUE BIRD), a dorky young “assistant pig-keeper” unhappy with his weird job of helping his boss Dallben (Freddie Jones, FIREFOX, FIRESTARTER, WILD AT HEART) take care of one single pig named Hen Wen. He thinks he should be “a famous warrior” having adventures and shit, which he practices for by swinging a stick at imaginary enemies, narrating about how fearless he is and how scared and cowardly they are. END_OF_DOCUMENT_TOKEN_TO_BE_REPLACED