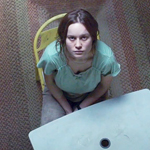 Like THE LOVELY BONES this is childish fantasy used as an escape from evil and tragedy. They don’t come out and say it at first, but Ma was kidnapped and locked in here at age 17, and gave birth two years later. So that tells you who the father is. END_OF_DOCUMENT_TOKEN_TO_BE_REPLACED