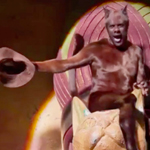 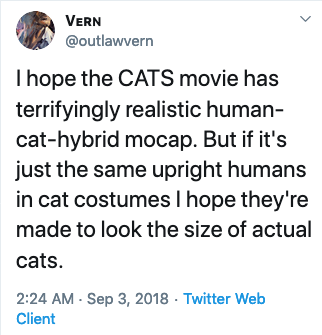 Sorry, everybody. CATS was my idea. It was already a record-breaking Broadway musical slated for cinematic adaptation from LES MISERABLES director Tom Hooper, but I was the one who suggested they ditch the traditional makeup and do the cats as hideous mocap animal-human hybrids on oversized sets. In my defense I was picturing more of a RISE OF THE PLANET OF THE APES type of design where the faces have cat-like structure to them. I didn’t know it was gonna be human faces on furry Barbie doll bodies, which is a different type of creepy than I imagined.

I feel bad that this whole fiasco has caused all kinds of speculation about Hooper being a bad director. I personally didn’t much care for his best picture winning THE KING’S SPEECH, especially after it dissipated from the public consciousness before I could make THE KING’S PEACH to kick off a prestige version of Asylum mockbusters. But I truly was won over by THE MISERABLES. I’m not a fan of the Broadway aesthetic at all, not even Rappin’ Hamilton, and I saw that movie reluctantly for best picture nominee completist purposes only, so I was shocked when I totally loved it. Some of that is due to good choices on Hooper’s part, such as insisting on recording all the singing live and doing Anne Hathaway’s emotional song in one shot in closeup in a coffin, but also I was unfamiliar with it, I was experiencing that story for the first time, and it’s a good one. Way to go, Victor Hugo. You nailed that one. Les congratz. END_OF_DOCUMENT_TOKEN_TO_BE_REPLACED