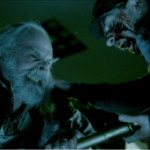 The story begins on Christmas Eve at a spooky North Pole, where a ragged looking Santa Claus (George Buza, THE CHRISTMAS SWITCH, THE CASE FOR CHRISTMAS, A CHRISTMAS WEDDING, SNAKE EATER II: THE DRUG BUSTER) is preparing for his flight. Something seems wrong, and when he turns around there’s a bloody slash across his face. Then it skips to 12 hours earlier. END_OF_DOCUMENT_TOKEN_TO_BE_REPLACED