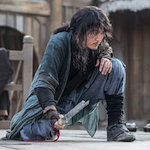 Unspecified years later, Tae-yul (now Jang Hyuk, VOLCANO HIGH) is a recluse living in the mountains with his teenage daughter Tae-ok (Kim Hyun-soo, THE FIVE). He periodically has problems with his vision, and a monk tells them to go get a special herb from a trader he knows named Hwa Seon (Lee Na-Kyung, BATTLE FOR INCHEON: OPERATION CHROMITE) or he’s gonna go blind. END_OF_DOCUMENT_TOKEN_TO_BE_REPLACED