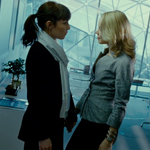 Holy shit, Brian De Palma made a new movie. It’s a remake of the 2010 French thriller LOVE CRIME, but it’s still a new Brian De Palma movie. Rachel McAdams from MEAN GIRLS plays Christine, a grown-up mean girl high up in an advertising firm. Isabelle (Noomi Rapace, DEAD MAN DOWN) has a big career opportunity coming to Christine’s place to work on a smart phone campaign. She’s nervous but they get along well. Christine seems to be a cool boss and collaborator until she brazenly takes credit for the ad that Isabelle came up with and created entirely without her. Even worse she convinces Isabelle that it was okay to do that to her because they’re a team and one’s success makes the whole team look good or some bullshit like that.
END_OF_DOCUMENT_TOKEN_TO_BE_REPLACED